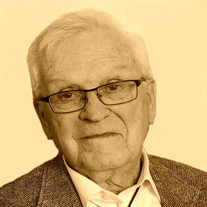 Joseph Dean Anderson, 92 returned to his heavenly home on Saturday, February 26, 2022 at his residence in Logan, Utah. Joseph was born in Syracuse, Utah on January 10, 1930. He was the son of Arthur Raymond Anderson and Mary Alice Hill Anderson. Joe was the youngest of five children. As a child Joe and his siblings would gather and clean eggs from the hundreds of chickens in their backyard. As a youth he was busy in the fields helping on the farm. While attending Syracuse Elementary School, you would have found Joe wearing a pair of bib overalls with a pocketknife and marbles in his pockets. After Syracuse Elementary, he attended North Davis Jr. High were he had a tendency to get in trouble for talking too much in class. Later at Davis High School, Joe participated in tennis and wrestling and lettered in both sports. Joseph was called to labor in the Central States Mission for the Church of Jesus Christ of Latter-day Saints. Soon after his mission, he was drafted into the U.S. Marine Corps, during the Korean War. After his time in the service, Joseph married Edesa Zaugg on July 29, 1954, in the Logan Temple. He worked for over 30 years at Hill Air Force Base and several other part time jobs to make ends meet as his family grew. After retirement Joe and Desa were able to serve three LDS missions together as well as officiate in the Logan LDS Temple together for 19 years. He spent as much time as he could with his children and others teaching them the value of hard work and service. Most days you could find Joe working in the yard raking leaves, down by the pond, in the river cleaning out limbs or driving his truck of debris to the dump. He enjoyed collecting coins, putting puzzles together, playing Solitaire and watching a good old western re-run. Joe loved traveling and enjoyed reminiscing about his adventures and vacations. Joseph is survived by his wife Edesa of Logan, UT and his children Joquetta Taylor (Kevin) of Logan, UT. Gail Baggs (Darran) of No. Salt Lake, UT. J Anderson (Jennette) Rapid City, SD. Owen Anderson (Diana) Gilbert, AZ. Desann Griffiths (Brent) Garland, UT. Teresa Roberts (Scott) New Prague, MN. He is also survived by 23 grandchildren and 42 great-grandchildren. He is also survived by sister-in-law, Barbara Anderson and many loving nieces and nephews. Joseph was preceded in death by his parents Arthur Raymond Anderson and Mary Alice Hill Anderson, his brothers Raymond (Verletta) Anderson, Wayne Anderson, and sisters Faye (Norman) Hawks and Mary (Roy Atkinson) (George) Dufur. The family would like to express thanks to everyone who helped Joe during these last few months. Funeral services will be held on Saturday, March 5, 2022 at 11:00 AM at the LDS Church on 940 Three Pointe Ave, Logan, UT. Prior to the service, the viewing will be held from 9:30-10:30 AM. Interment will take place at the Syracuse, UT cemetery. In lieu of flowers, memorial donations can be made to the Church of Jesus Christ of Latter-day Saints missionary fund. Services may be viewed online via the following link: https://zoom.us/j/91695271985

Joseph Dean Anderson, 92 returned to his heavenly home on Saturday, February 26, 2022 at his residence in Logan, Utah. Joseph was born in Syracuse, Utah on January 10, 1930. He was the son of Arthur Raymond Anderson and Mary Alice Hill Anderson.... View Obituary & Service Information

Joseph Dean Anderson, 92 returned to his heavenly home on Saturday,...