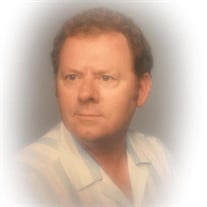 Joe “Butch” Golden, 80, of North Logan, UT, formerly of Arkansas City, KS, passed away Wednesday, June 10, 2020, in Hyrum, UT. Graveside services have been scheduled for 9:30 a.m. Wednesday, June 17, 2020, at the Riverview Cemetery, 1515 N 15th, Arkansas City, KS 67005. All who knew Joe are welcome to attend. Joe was born March 10, 1940 to Sarah Delilah Hughes and Joseph Weakley Golden in Arkansas City, KS. Joe grew up in Ark City with his older sister, Dixie Lee, and younger brother, Larry Wade. He attended and graduated from Cedar Vale High School in 1958. Upon graduation he enlisted in the Army National Guard and completed boot camp in Fort Ord, CA. After returning to Ark City Joe married Elaine Jean Hatcher on May 23, 1964. They had one child, Jennifer Lynn Golden. They were later divorced. Joe spent his life working as a General Foreman in the aircraft manufacturing industry for Cessna and Gulfstream. This is where he met the love of his life, Peggy Joan Ala. They were married August 7, 1976 and made their home in Wichita, KS. Joe was a lifetime member of the American Legion, Fraternal Order of the Eagles, V.F.W. and obtained Level 32 Mason. His Shriner status was very special and sacred to him. He is survived by brother-in-law, Joe Wade (Dixie), and brother, Larry Wade Golden, both of Arkansas City, KS; daughter, Jennifer Lynn Golden (Dan); grandchildren, Amanda Jennifer, Danner Joseph, Courtnee Kay; and great-grandchildren Adri Eric, and Kian B, all of Hyrum, UT. Joe is preceded in death by his parents; sister, Dixie Lee Wade; and wife, Peggy Joan Golden.

The family of Joseph "Butch" Michael Golden created this Life Tributes page to make it easy to share your memories.

Send flowers to the Golden family.