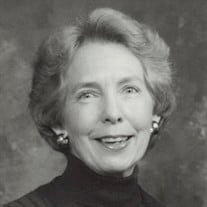 Joyce Keller Parkinson, 92 years old, passed away on July 4, 2020 while residing in The Legacy House in Logan, UT. Joyce was born in Preston, Idaho and spent her childhood years nearby in Mink Creek on the family farm. The family later moved to Preston where her father had accepted a position to teach school. Joyce met Spencer Parkinson, from Franklin, in her teens, and their first date was on Halloween in 1944. Joyce was named Preston Rodeo Queen in 1945 and later, while attending Utah Agricultural College (now USU), she served as the ROTC Sponsor Corps Colonel and was also selected as the Pi Kappa Alpha “Dream Girl.” Joyce and Spencer married on June 27, 1949 in the Logan Temple and started out their married life in Salt Lake City, where Spencer began his internship at St. Marks Hospital as a new doctor. Joyce taught high school Home Economics for a year before beginning her lifelong calling as mother of 7 children (one of whom died shortly after birth). Because Spencer spent much of his early career as a Naval physician, Joyce and the growing family moved many times, including living in Guam for a while, and in several cities on the west coast, and even at the Naval Academy in Annapolis, MD, before moving to Logan for private practice. Joyce led a life of service, exemplified in her filling a medical mission with Spencer in Manaus, Brazil. After completing work there, they were transferred to a proselyting mission in British Columbia, Canada. She and Spencer served in the Logan Temple, and also volunteered at Hillcrest Elementary School for years, helping students with reading. Joyce loved reading, consuming everything from the daily Wall Street Journal to many history books, best seller books, and Church books. She was a life-long pianist and later also an organist, and insisted that all of her children take piano lessons, in spite of grumbling by her three boys. Joyce pursued several additional hobbies such as etiquette, baking, canning, and international travel. Her children cherish the memories of freshly baked home-made bread or chocolate chip cookies they frequently encountered when arriving home from school. Joyce prided herself with her ability to memorize, and could repeat all the US presidents in order, say her ABCs backwards, and recite several other things by memory. Joyce was preceded in death by her parents, Elmo and Thelma Keller, her second son, James, who died as an infant, Patricia (her youngest child), and her beloved eternal companion, Spencer. She is survived by Spencer (Gayle), Stephen (Susan), Susan Crockett (Carl), Robert (Tracine), Nancy Muncy (Brandon), and Kelly Glenn (Patricia’s husband). She is also survived by her two brothers, Elmo and David Keller. Joyce has a multitude of grandchildren, great-grandchildren, and even some great-great grandchildren. An intimate family memorial graveside service is being held for Joyce at the Logan Cemetery. The family wishes to express sincere thanks to Dr. Michael Stones, mom’s long-time physician, the staff at The Legacy House, and the hospice workers from Encompass, for their loving, caring service to mom in the final stage of her life.

Joyce Keller Parkinson, 92 years old, passed away on July 4, 2020 while residing in The Legacy House in Logan, UT. Joyce was born in Preston, Idaho and spent her childhood years nearby in Mink Creek on the family farm. The family later... View Obituary & Service Information

The family of Joyce Keller Parkinson created this Life Tributes page to make it easy to share your memories.

Send flowers to the Parkinson family.