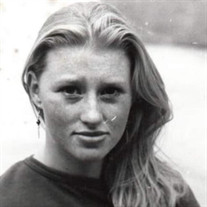 Julie Diane Pruett, age 43, passed away suddenly on September 7, 2021 at her home in Logan, Utah. She was born in Long Beach, California on March 7, 1978 to Louis E. and Linda Barlow Pruett. She was one of eight children. When she was about eleven years old, the family moved to Utah. She graduated from Logan High School in 1996, and then went on to graduate from Stevens Henager College in nursing. Julie was the first to graduate from college in her family, and she was very proud of that. On September 7, 1996, she married Robert Snow Derrick in North Logan, Utah. They had four children and were later divorced. Julie worked in a variety of jobs, but for the past few years was employed at Caisson Laboratories in Smithfield, Utah where she was a sales representative. It was at Caisson that she met the love of her life, Michael Harman, and they were very happy together. She was full of life and will always be remembered for her wicked sense of humor and her big heart. She often took in strays in need, both human and animal, to give them love, shelter, and support. Julie found driving in the car very therapeutic and also enjoyed hiking and music. Family relationships were very important to her, and she considered many of her coworkers at Caisson to be her family. She will be sorely missed but fondly remembered. Julie is survived by her four children, all of Logan: Bobby Derrick, Ashley Mae Derrick Santana, Aaron Derrick, Lynda Derrick, and her three “adopted” children Sara, Chelle, and Matt Harman; her mother, Linda Pruett, and siblings Terry, Gennifer, Wayne, David, Heidi, Jay, and Jane Pruett. She was preceded in death by her father, Louis E. Pruett, Donna (aunt), Phil (uncle), and Sharon (aunt). The family would like to recognize and thank Caisson Laboratories for their support and assistance at this difficult time. The viewing will be held on Saturday, September 18th from 1030 to 11:30 a.m. at Allen-Hall Mortuary, 34 East Center Street, Logan. Graveside services for Julie will be that same day at 12:00 noon at the Trenton, Utah Cemetery.

Julie Diane Pruett, age 43, passed away suddenly on September 7, 2021 at her home in Logan, Utah. She was born in Long Beach, California on March 7, 1978 to Louis E. and Linda Barlow Pruett. She was one of eight children. When she was about... View Obituary & Service Information

The family of Julie Pruett created this Life Tributes page to make it easy to share your memories.

Send flowers to the Pruett family.