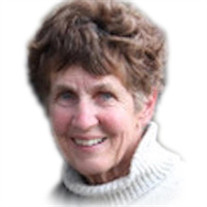 Graveside services may be streamed online Tuesday, May 19th beginning at 1:00pm via the following link: https://us02web.zoom.us/j/84119023337?pwd=aFdDWFJVNURvY0NwOE1YWFVjTXp4QT09 Karen L. Smith passed away May 6, at the Autum Care memory facility in Hyde Park. She was born November 5, 1942, in Oakland, California to Arthol and Aurtence Prestwitch. She spent her childhood and teenage years in Sacramento, California. In grade school she attended a one room schoolhouse, later attended and graduated from C. J. McClatchy High School. She attended Brigham Young University for one year before she married Gary Strobel June 17, 1963 in the Salt Lake Temple. She and Gary moved to Bozeman, Montana shortly after they were married. Her husband, Gary, was a professor at Montana State University. She and Gary had four children. Scott and David who live in Connecticut, Kendra who lives in Salt Lake, and son Jeffrey who passed away as an infant. She has seven grandchildren and four great grandchildren. She and Gary were divorced in 1989. She married Bruce K. Smith January 20, 1990, in Bozeman, Montana, they were later sealed together in the Logan Temple. She worked for a short period of time for Career Transitions an agency in Bozeman working with abused women and women who were in transition in their lives. In 1994 Bruce was named publisher of The Herald Journal and they moved to Cache Valley where Karen lived until her death. In her lifetime she produced hundreds quilts and scores of baskets. She loved working in her sewing room piecing together small pieces of fabric for the quilt tops. She called her sewing room her “happy place.” She and many of her friends took up basket making and spent many hours and days making baskets. As a result her house is decorated with quilts and baskets. When she became ill she insisted that anyone who came to visit her not leave without taking a quilt and or a basket. She gave away lots and lots of quilts and baskets. She was very compassionate person and cared deeply for less fortunate people. She always had extra money in her purse and did not hesitate to help out an obviously poor mom in the grocery line by paying for her groceries. She could not pass a homeless person on the street without giving them some of her “give away” money. Shortly after moving to Cache Valley Karen became a court appointed advocate for abused children and reported her findings to the guardian ad litem of the district court. She was a life long member of The Church of Jesus Christ of Latter Day Saints. She worked with the young women in her ward and in the Relief Society. She really enjoyed working with young boys as a cub scout den mother while she was in Bozeman. In North Logan she helped young Boy Scouts make baskets for their basketmaking merit badge. She always thought she should be called as the Deacon’s Quorum Advisor. She wanted to be cremated when she died. She also, wanted her headstone in the cemetery to be a bench with the inscription “Sit Long-Talk Much” Her bench has been placed in the North Logan Cemetery. A grave side service will be held at a future date. In lieu of flowers Karen would be happy with a monetary contribution in her name to Four Paws animal rescue in Nibley.

Graveside services may be streamed online Tuesday, May 19th beginning at 1:00pm via the following link: https://us02web.zoom.us/j/84119023337?pwd=aFdDWFJVNURvY0NwOE1YWFVjTXp4QT09 Karen L. Smith passed away May 6, at the Autum Care memory facility... View Obituary & Service Information

The family of Karen L. Smith created this Life Tributes page to make it easy to share your memories.

Graveside services may be streamed online Tuesday, May 19th beginning...