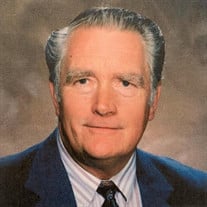 Karl Raymond Peterson of Providence, UT passed away peacefully, from natural causes due to old age, on October 30, 2021 with his beloved granddaughter, Paige, by his side. Karl, the eldest child of Raymond Parley and Zora Poulsen Peterson,... View Obituary & Service Information

Send flowers to the Peterson family.