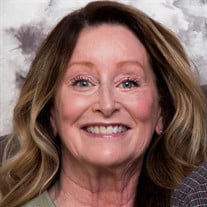 Kathy was memorialized and laid to rest on Tuesday, January 18, 2022 in Logan, Utah. The previously postponed visitation, memorial and dinner in Logan has been cancelled. A memorial service in Henderson, NV will proceed as planned on February 5 beginning at 11:00am at the LDS chapel located at 2091 Wigwam Parkway, Henderson, Nevada. _____________________________________________________________________________________ Kathleen Sue Britt Wimmer, 71, of sunny Henderson, NV and chilly Lehi, UT, passed away on January 8, 2022, after a long battle with physical and mental illness. Kathy was born on August 14, 1950 to Voy Britt and Ila Mae Moser in Honolulu, HI while her father was serving in the Air Force. She spent her growing up years in Las Vegas, NV and graduated from Las Vegas High School in 1968. She attended college at UNLV. She married Mario Aguero, and they moved to Forest Grove, OR and had a son, Jeremy Arin Aguero. While her marriage to Mario didn’t last, she found herself back in Las Vegas working at the Clark County Assessor’s Office and made friends with Richard (Dick) Wimmer, who would become the love of her life and best friend. They married March 29, 1981, uniting their lives, each with a 6-year-old son (Jeremy Arin Aguero and Matthew Richard Wimmer). On April 6, 1989 their marriage was solemnized in the St. George Temple of The Church of Jesus Christ of Latter-day Saints. They were married for almost 41 years. Richard and Kathy went on to have 2 more children, Britt and Bryan Wayne. Being a mother was one of the most important parts of Kathy’s life, a role that gave her so much pride, joy and purpose. She was an amazing mom not only to her 4 children, but to extended family, friends and everyone in her reach. She loved with no bounds, no judgment and no conditions and left everyone better than she found them. Kathy was our biggest cheerleader and our constant supporter. Our family would not be where it is today if we didn’t have her as our wife and mother. As a younger woman, she was a competitive swimmer, skier, excellent tennis player, a leader in her church community and involved in PTA, a team mom, and any other endeavor that enriched her kids’ lives. She was a licensed real estate agent for many years, working with Richard in sales and management of their rental properties. As she aged, when she wasn’t serving everyone around her, Kathy could be found loving and caring for her plants in her home and yard, making things more beautiful or spoiling her grandkids, who adored her. She also found joy and friendship dancing with Jean’s Golden Girls in Utah County. Since Richard retired in 2010, she and Richard enjoyed traveling all over the world together with family and good friends. She loved her Savior and was an active member of The Church of Jesus Christ of Latter-day Saints. Kathy was predeceased by her mother and father. She is survived by her husband, Richard Joseph Wimmer; sister Sheri Webb of Coos Bay, OR; son, Jeremy Arin Aguero (Melissa) of Henderson, NV; stepson, Matthew Richard Wimmer (Amy Toulson) of Northampton, MA; daughter, Britt Wilkinson (Aaron) of Lehi, UT; son, BryanWayne Wimmer of Las Vegas, NV; her 10 grandchildren, Jacob Aguero, Emma Aguero, Abrahm Aguero, Emery Wilkinson, Patch (Miles) Toulson Wimmer, Van Wilkinson, Izzy Wilkinson, Delena Toulson Wimmer, Faye Wilkinson, Quinn Wilkinson; and her favorite (only) grandcat, Cleopatra (Cleo). She will be sorely missed by so many family and friends, but we are thankful her body and mind are finally at peace. In lieu of flowers, please consider donating in Kathy’s memory to one of these charities: The Primary Children's Hospital: https://intermountainhealthcare.org/primary-childrens/give/ The Michael J. Fox Foundation for Parkinson’s Research: https://www.michaeljfox.org/donate/ The Lou Ruvo Center for Brain Health Private family services will take place Tuesday, January 18th. Interment will be in the Logan City Cemetery. There will be a memorial service in Henderson, Nevada, Saturday, February 5, 2022 beginning at 11:00am at the LDS chapel located at 2091 Wigwam Parkway, Henderson, Nevada.

Kathy was memorialized and laid to rest on Tuesday, January 18, 2022 in Logan, Utah. The previously postponed visitation, memorial and dinner in Logan has been cancelled. A memorial service in Henderson, NV will proceed as planned on February... View Obituary & Service Information

The family of Kathleen Britt Wimmer created this Life Tributes page to make it easy to share your memories.

Kathy was memorialized and laid to rest on Tuesday, January 18,...

Send flowers to the Wimmer family.