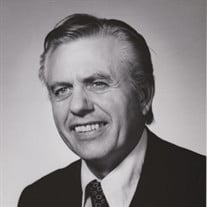 Keith Brown Hogan, aged ninety-five, passed away on Wednesday, January 26th, 2022. Keith was born on March 11, 1926, in Draper, Utah to Glen Charles and Clara Elizabeth (Brown) Hogan. He was the first of five children. He was raised in West Jordan, Utah, where he graduated from Jordan High School and was in the MBA program at the University of Utah. He married Helen Thurgood on May 25, 1955, together they raised five children. He was drafted into the Army Air Corps in World War II and trained as a waist gunner for the B-29.  He finished up the war playing trombone in the Philippines with an Air Corps band. After being honorably discharged, Keith chose to follow his religious beliefs and served for two years in the Canadian East Mission. Keith had always been a prolific reader, but on his mission, he became an ardent and devoted student of the scriptures. In later years, his favorite church calling was a gospel doctrine teacher.  He was always taking notes and trying to improve himself. Keith learned to work hard as a young man, delivering milk for the family-owned Hogan Dairy, in West Jordan Utah, which he ran and continued as a family business until the Dairy was sold in 1963. After the sale of the Dairy, Keith worked for Sears, The West Jordan Sugar factory while working on his Master’s Degree in Business in order to advance his career and support his family.  He worked as Value Engineer at Tooele Army Depot for the bulk of his professional career. His job was to come up with ideas to save the government money or improve a process and implement that idea. Keith’s objective was to save the government $1M each year, which he reached and surpassed. Keith’s life has always been goal-centered and positive. He received many awards and commendations for his accomplishments. Keith focused on helping his five children grow and develop to reach some of their full potentials.  In countless ways he spent time with them, giving them constant and consistent appropriate attention.  He was a great example of total commitment to his God in his daily morning run and labored alongside his children in service projects. He took his boys on 50-mile hikes as scoutmaster and served as a young men’s president and counselor over the youth programs.  Being such a great dad, a spiritual leader, an attentive, intelligent, emotionally supportive father was one of Keith’s finest accomplishments. After the children left home, Keith and his wife Helen started their years as senior missionaries for the Church of Jesus Christ of Latter-day Saints.  They served in the Knoxville, Tennessee Mission, then the Vineland, New Jersey Mission, and finally the Salt Lake City, Inner City Mission.   Afterward, they served in the Ogden Temple. He will be missed for his terribly dry dad jokes and stories, his intelligence and ability to analyze thoughts, his creativity at solving problems, and his devotion to learning and to the Savior. He is survived by his children Tracy, Rick, Eric, Leslie, and Chad, 34 grandchildren, 71 great-grandchildren, and his brother Richard. Preceded in death by his parents, his wife Helen, brothers Dimar, Max, and sister Caroline Crawford. A viewing will be held starting at 10:30, on February 5th, 1945 W. 9000 S. West Jordan, Utah 84088.  A Memorial service will commence at noon and a graveside service for the family in the North Ogden Cemetery, Utah. Services will be livestreamed and may be viewed online at www.allenmortuaries.com Zoom Link: https://us02web.zoom.us/j/89794612061?pwd=S0k3MFdpRWdzMWxHNTE4MnhWVkpFUT09 Password: Keith

Keith Brown Hogan, aged ninety-five, passed away on Wednesday, January 26th, 2022. Keith was born on March 11, 1926, in Draper, Utah to Glen Charles and Clara Elizabeth (Brown) Hogan. He was the first of five children. He was raised in West... View Obituary & Service Information

Send flowers to the Hogan family.