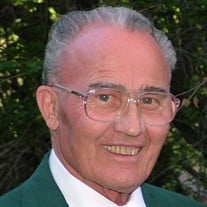 Kenneth Tobler Bladen - Our very much loved husband, father, brother and grandfather, Kenneth Tobler Bladen peacefully passed from this life in Logan, Utah on March 22, 2017 at home with his family. Born November 10, 1929 in Cedar City, Utah to Thomas Adams and Lottie Tobler Bladen; Ken was the second of five children. He grew up in Cedar City and learned to work very hard on the family farm, a work ethic that served him well his entire life. He graduated from Cedar City High School participating in football and basketball. He was very gifted in math and went on to attend Branch Agricultural College (now Southern Utah University). Ken served in The Korean War as a member of the Utah Army National Guard; 213th battalion from Southern Utah which also included his brother, Elwood, two cousins and other friends. During a battle at Kapyong his battalion was miraculously preserved and all returned home safely. In his young adult life, Ken enjoyed working with animals and had 20 young heifers and 1 Charolais bull, and he knew from his childhood that farming/ranching was difficult work. Ken enjoyed hunting deer and cougar in the Southern Utah mountains with his good friend, Darce Prince. He and his buddies were also famous for their “Bachelor’s Club”. That came to a swift end when Ken married Carolyn Condie in the St. George, Utah LDS Temple on July 20, 1960 where they were sealed for time and all eternity. After a short time in Southern Utah, Ken & Carolyn were transferred to Provo to work for US Steel in the metallurgical department. Deciding he wanted to further his education, the small family moved to Logan, Utah where Ken could attend Utah State University pursuing an education in civil engineering. With the growing needs of a young family, Ken regrettably left school for full time work at ATK/Thiokol. Although Ken was never able to return to school, he instilled a deep impression on all of his children of the need for higher education. He was employed by the United States Postal Service for 37 years as a letter carrier and clerk. He loved being outdoors and most of his summer daylight hours were spent in the gorgeous vegetable garden he raised each year for his family. Ken was very active in The Church of Jesus Christ of Latter-Day Saints, holding many church callings. The callings he enjoyed the most were the ones where he was least visible, such as Ward Clerk and Secretary of 4 Stake Welfare Farm Committee, which is a testament to his quiet service. He served an 18 month mission at the Church Employment Office and enjoyed his time there helping and serving others. Ken is survived by his wife, Carolyn, daughter Debra Peterson (Ray) Kamas, UT, daughter Diane Frank (Craig) Providence, UT, daughter Brenda Olfson (Mark) Central Point, OR, son, Keith Bladen (Kelsey) Hyrum, UT, daughter Donna Bordelon (Philip) Klamath Falls, OR, brother Boyd Bladen, St. George, Utah, sister Marilyn Dalton, Parowan, Utah, and sister-in-law, Dorothy Bladen, Delta, Utah and numerous nieces & nephews. Ken was greeted on the other side by his two sons Scott and Steve Bladen, grandson Oren Shuler, his parents and other loved ones. Also surviving are 20 grandchildren and 7 great-grandchildren whom he loved very much and is very proud. Memorial services under the direction of Allen-Hall Mortuary will begin with a viewing Friday, March 24, 2017, from 6:00-8:00pm at the Allen-Hall Mortuary, 44 East Center, Logan, Utah. Saturday, March 25, 2017, services will be held at the Church of Jesus Christ of Latter Day Saints at 250 North, 400 West, Logan, Utah; a viewing will be held from 10:30–11:30am, the funeral services will follow at 12:00pm. Special Thanks to Dr. Michael Stones and staff for taking great care of Ken. In lieu of flowers, donations to The Church of Jesus Christ of Latter-day Saints Perpetual Education Fund would be Ken’s wish. Condolences can be expressed at www.allenmortuaries.net.

The family of Kenneth Tobler Bladen created this Life Tributes page to make it easy to share your memories.

Send flowers to the Bladen family.