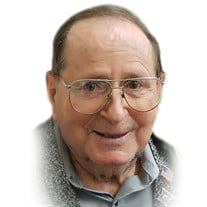 To view the services online click on the following link: https://us02web.zoom.us/j/83383670540 Kenneth Roundy Cardon, age 96, of Benson, Utah passed away Monday September 7, 2020. He was born September 22, 1923 to Hyrum Michael Cardon and Esther Isabelle Roundy. He married Alice Joy Seamons on September 22, 1944 in the Logan Temple. Kenneth grew up working on the family dairy farm and later partnered with his parents and brother in its operation. He graduated from North Cache High School and attended what is now Utah State University. He served in the United States Navy during World War II and participated with the Utah Honor Flight in Washington D.C. honoring veterans. He served in the Utah State Legislature from 1956 to 1958. Kenneth worked diligently to establish a successful and well known insurance business. He received many recognitions and awards for his outstanding performance as a representative and a leader. He was a county officer on the Farm Bureau Federation. He was President of the Utah State Soil Conservation and served on the National Board of Directors for that organization. Kenneth was a faithful member of the Church of Jesus Christ of Latter-day Saints. He served in many capacities including bishop of the Benson Ward for 12 years, a member of the high council, as a counselor in the presidency of a Utah State University Stake, and as an executive secretary for the Benson Stake. He and Alice served together as Primary teachers; as missionaries in the Connecticut Hartford Mission, the Manila Philippines Temple Mission where he served in the temple presidency, the Nauvoo Illinois Temple Mission; and as Temple officiators for 15 years in the Logan Temple. Kenneth served as a sealer in the both the Manila Philippines and Logan Temples. Kenneth lived a life of service. He shared his talents, time and money to any good cause within his reach of influence. He was a very hard worker all of his life and showed by his example the fulfillment of personal initiative. He was an avid reader, and has a vast knowledge in a wide range of subjects. He had a great sense of humor and the ability to involve others in conversation. He is admired and loved by all that know him. Kenneth is survived by his sister Nada, children: Sidney (Nancy), Joy (Mike) Reyes, Marlin (Akemi), Gaye (Vic) Lee, Allan (Jan), and Kent (Karen); 23 grandchildren, 54 great-grandchildren and 10 (soon to be 12) great great-grandchildren. Kenneth was proceeded in death by his beautiful wife 59 days prior, his parents, and siblings Margaret, Doyle, Neva, Beth and Wayne. Graveside services will be held Saturday, September 12 at 11am in the Logan City Cemetery at 1000 N. 1200 E. There will be a viewing from 9 - 10:00 prior to the service at Allen-Hall Mortuary on 34 E. Center in Logan. Condolences and memories may be shared, and funeral service will be zoomed live at www.allenmortuaries.net. In lieu of flowers donations may be made to The Church of Jesus Christ of Latter-day Saints Missionary Fund in his honor. Masks and social distancing are required. Folding chair and water are recommended.

The family of Kenneth Roundy Cardon created this Life Tributes page to make it easy to share your memories.

Send flowers to the Cardon family.