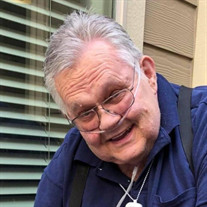 Kenneth Edwin “Ed” Seamons, 77, of Hyrum, UT (formerly of Hyde Park, UT) returned to his Heavenly Father surrounded by his children on Friday October 29, 2021 in Logan, UT. He was born May 15, 1944 in Logan to Kenneth Jackson Seamons and Helen Jewel Hancey Seamons. He was the third child and oldest son. He spent his youth in Hyde Park and graduated from North Cache High in 1962. Then served a mission for the Church of Jesus Christ of Latter-Day Saints in West Germany from 1965 to 1967. When he returned, he was set up on a blind date where he met Karen Lynnette Hugie, who he later married in June of 1968. The lived in Salt Lake City where Ed was employed for 20 years at Salt Lake County Clerk’s office. During this time, they had 7 children. In December of 1985 the family returned to Cache Valley when Ed got a job with ATK Thiokol as a Quality Control Inspector. In 1992 Karen and Ed divorced and Ed returned to Hyde Park. After complications from a back surgery, he retired in 2009 from ATK. Ed remained in Hyde Park until 2019 when he moved to Blacksmith Fork Assisted Living in Hyrum. Ed loved sports. He activity participated in high school playing both football and basketball. He spent many years coaching Little League baseball for the community and his children. Later in life he loved supporting Sky View athletics and USU Aggie basketball. When there wasn’t a live game to attend, he was always looking for “the game” on tv. He was always an active member of the Church of Jesus Christ of Latter-Day Saints. He served in many callings throughout his life. He loved the gospel and loved to share his testimony with all. Ed is survived by his 7 children, Krista (Neil) Bodrero, Laurie (Brian) Johnson, Nichole (Raymond) Terveen, Richard (Michelle) Seamons, Tyler (Jodi) Seamons, Heather (Steven) Erickson, and Darren (Jeanette) Seamons; 27 grandchildren and 8 great-grandchildren. He is also survived by his two sisters, Sherrill Joy of Utah and Jewel (Thayne) Karren of Arizona; and his sister-in-law Pam Seamons of Utah. He was preceded in death by his parents and his brother Steven Seamons. The family would like to express their appreciation to Blacksmith Fork Assisted Living for their patience and loving care of Ed during these last few years. Also, to Logan Regional Hospital ICU staff and doctors and Doctor Bradley Chambers. Funeral services will be held Saturday November 6, 2021 at 11:00am with a viewing prior from 9:30 a.m. to 10:30 a.m. in Hyde Park 5th Ward (63 East Center). Burial will be in the Hyde Park City cemetery. There will also be a viewing on Friday November 5, 2021 from 6:00 p.m. to 8:00 p.m. at Allen Mortuary of North Logan, 420 East 1800 North, North Logan, UT. Interment will take place in the Hyde Park City Cemetery. Condolences may be expressed online at www.allenmortuaries.com Services will be livestreamed and may be viewed via the following link: https://us02web.zoom.us/j/87982177835?pwd=S0dFUEh6L1pqUVRWWlp6Z2NtUzQ3dz09 Password: Seamons

Send flowers to the Seamons family.