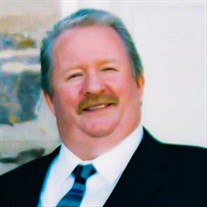 On the beautiful spring day of April 16th, 1957, a redheaded boy entered the world. Full of stubbornness, what ails ya, a touch of hell fire, and sweetness on top. This little boy grew to have a steady determination and a strong sense of adventure. Saved from drowning by his “little” older sister Lynette, the boy grew into a man. While working at JcPenny’s, he saw a beautiful young woman, Lorie Petersen. He played all his cards, including his Chevy Chevelle, to get her to go out with him. And she did! In her words, “the car was hot and so was he.” On August 24th 1978, he was sealed to his beautiful, sweet Lorie, in the Salt Lake City Temple, and together they made a life. They would welcome five children, Jeremy Kevin, married to Susana, Jessica, married to A.J. Anderson, Jennifer, who is the glue that holds them all together, Jamie Lynn, married to Spencer Curtis, and Jaron Reese, married to Lisa. Eventually these bonds brought him 8 beautiful grandchildren who were the joy of his life. Zoee, Jazmyn, Kenzie, Reese, Dylan, Connor, Hunter, and Crew. All loved him dearly and looked forward to the hugs and treats that he would sneak them when they came to visit. He was a friend to all and had a gift to make those around him feel comfortable to share a part of their lives with him. He could often be found in the stores talking to complete strangers, as if they had known each other for years. He loved laughter and joy and did all he could to bring it to everyone. If you talked to him long enough he was sure to share one of his favorite dad jokes with you. He taught his children, through example, the importance of hard work, dedication, respect, generosity, and love. He struggled with many health trials throughout his life, often making the doctors and nurses that knew him best, marvel, and often say “we’ve only read about this in text books.” He lived a full and happy life and on the evening of January 11th 2022, Kevin was welcomed with open arms, as he stepped through the veil of this world to join his Parents, Cleon and Leah Jane (Jorgensen) Humphreys, his brothers, Orvan, Dale, and J.C, and his sisters, Marise and Janet; along with, many other family and friends in the great eternities beyond. He will be dearly missed by his surviving wife Lorie. His children and grandchildren. As well as, his brother, Robert, and sister Lynette Edwards. In memory of Kevin, we ask that you do one of his most favorite things in his honor: fish, laugh, tell a silly joke, watch a western, serve someone. The family will hold a small graveside service for immediate family on Thursday, January 13th, 2022. A celebration of life will be held on his 65th birthday, April 16th. Condolences may be expressed online at www.allenmortuaries.net

On the beautiful spring day of April 16th, 1957, a redheaded boy entered the world. Full of stubbornness, what ails ya, a touch of hell fire, and sweetness on top. This little boy grew to have a steady determination and a strong sense of adventure.... View Obituary & Service Information

The family of Kevin Reese Humphreys created this Life Tributes page to make it easy to share your memories.

Send flowers to the Humphreys family.