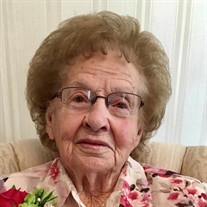 Kleta Hale Crosbie, our beloved mother, grandmother, and great grandmother, passed away on February 13, 2021, at the age of 99. She was born in Groveland, Idaho on December 9, 1921, to Sylvia Laveria Jensen and Eugene Clark Hale. She was the fifth of six children; four sisters (Winona, Eunice, Guinivere, Jean) and a brother (Woodrow). When she was young, her family moved to Logan where her father opened an ABC Root Beer stand. She grew up in the “Island” area and attended Logan City schools. She graduated from Logan High School where she developed many special friendships and served as a class officer her senior year. She met her eternal companion, Ervin Robert Crosbie, Jr. while working in Ogden, Utah and they were married on June 8, 1943, in the Logan LDS Temple. Following Ervin’s military service, they lived in Logan while Ervin attended Utah State Agricultural College. They moved to River Heights in1948 where they bought their first and only home and provided a loving environment in which they raised their five children. She loved and cherished her home and lived there for over 71 years. Kleta’s beloved Ervin passed away in December of 2009. She was his sole caregiver, after he suffered a brain aneurysm, until his death nearly 16 years later. They enjoyed 66 wonderful years together.   She and Ervin devoted much of their lives helping making River Heights a beautiful place to live. She was her husband’s assistant while he served as city clerk, recorder, and justice of the peace. In 2018, she was honored by River Heights City as “Pioneer of the Year” and over the years was also honored as “Friend of the City” and received the “Home Beautification Award”. One of her favorite activities was working in the yard and tending to her beautiful flowers. She took great pleasure in supporting her children and grandchildren by attending their various activities whenever possible. She was an active member of the Church of Jesus Christ of Latter-Day Saints and served faithfully in many callings. She was a wonderful cook, decorator of beautiful cakes, and will long be remembered for her delicious pies, rolls and holiday candy. She was an excellent seamstress and her talents extended to crocheting. In her later years, she became a prolific embroiderer and created an incredible number of beautiful pieces for her family to enjoy. The family always had a large and productive vegetable garden, much of which she canned. She loved the bi-monthly get togethers with her club, Las Amigas. Her association with her dear River Heights friends was strengthened as they met to eat good food, work on handicrafts, and share their lives. She is survived by her five children and their spouses: Brent (Bonnie) Crosbie, Karren (Steve) Mitchell, Lynette (George) Harris, Gaylene (Jed) Merrill, and Richard (Sherry) Crosbie. She was grandmother to 23 grandchildren and 46 great-grandchildren with four more on the way. She was preceded in death by her husband, parents, and siblings.   A memorial service will be held this Friday, February 19, 2021 at 11:30 am with a viewing prior from  10:30-11:30 am at the Allen-Hall Mortuary, 34 East Center Street in Logan. COVID regulations will apply and masks are required. Interment will be next to her husband in the Providence Cemetery located in River Heights. Live-stream services can be accessed at www.allenmortuaries.com.   The Family wants to give thanks to Gables Assisted Living and staff for the specialized care they have provided our Mother over the past two years; and to Integrity Hospice and staff for the compassionate service they have given these past few weeks. Last, but not least, a special thanks to her very dedicated ministering sisters, Debbie Hancey and Ann Edwards.   Services will be livestreamed and may be viewed via the following link: https://us02web.zoom.us/j/84457789136?pwd=L3pHRU5vUllGeG9sNTQzMWU0UUtPZz09 Password: Crosbie

Kleta Hale Crosbie, our beloved mother, grandmother, and great grandmother, passed away on February 13, 2021, at the age of 99. She was born in Groveland, Idaho on December 9, 1921, to Sylvia Laveria Jensen and Eugene Clark Hale. She was the... View Obituary & Service Information

Send flowers to the Crosbie family.