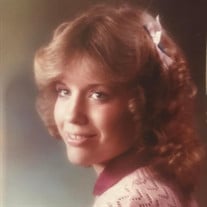 Our beautiful wife, mother, grandmother, sister, aunt and friend, Kristi Lynn Briscoe Galloway returned to the loving arms of her Heavenly Father, her daughter Hilary, her parents, her older sister, and her mother-in-law on February 26, 2022, after a short but courageous battle with cancer. Kristi was born January 31,1964 to Jay Lewis and Betty Lou Briscoe in Pocatello, Idaho. She was the fourth of five children and the second daughter. Her mother prayed to have another daughter and her prayers were answered. Kristi came with “sparky” blue eyes and a determined spirit. Kristi was raised in Kaysville, Utah and attended Kaysville Elementary, Kaysville Junior High, and graduated from Davis High School in 1982. She was involved in dance and gymnastics as a young girl. In her youth she was involved in AYSO soccer and loved it, love that was passed to her daughters. She spent her teenage years working at Lagoon in the summers where she made many friends. As a youth, she loved to spend time at Classic Roller Rink in Riverdale, Utah. She had her share of shenanigans and enjoyed having fun. She was an avid fan of Shaun Cassidy and his posters plastered her walls. She made friends easily and enjoyed spending time with them. Kristi loved walking the neighbor’s dog “Boompa,” mainly because he could pull her down the sidewalk on her roller skates. Her love for children caused her to offer to play with children of neighbors and friends. Kristi met and married Bill Peterson in the Salt Lake Temple, on May 24, 1983. They were later divorced. Kristi’s greatest desire was to be a mother and her dream came true with the birth of three beautiful daughters. Betsie, Hilary and Mycalah. They were her everything and she was their biggest cheerleader. She was so excited when she became and grandmother to Taylor, Zoey and Dezmond. She met her forever love Raymond Galloway and they were married November 9, 2002. They settled in Nibley, Utah. She loved Raymond dearly and it was reciprocated. Kristi enjoyed the trips to North Carolina to visit Raymond’s family where she was greeted with open arms. They were a great couple, supporting each other every step of the way. When Kristi was admitted to the hospital Raymond refused to sleep in the cot in the far corner of the room because if he did, he “would not be able to see Kristi.” Kristi was a lifelong member of the Church of Jesus Christ of Latter-day Saints and served in a variety of callings, with young women’s being her favorite. Kristi had faith in her Savior, Jesus Christ and desired to follow his example. Kristi had a beautiful voice and loved to sing, especially with her girls. They would sing at home or in the car while driving. One of her favorites was, “A Child’s Prayer.” Kristi knew how to work and worked hard. She worked for many years at ICON in Logan, Utah. She was a strong woman and got up every time she was knocked down. Kristi was a devoted daughter and spent time helping and caring for her parents. She was fiercely loyal to her family and friends. Kristi was beautiful inside and out. She had beautiful blue eyes that radiated her kindness. She never wanted anyone to feel alone or left out and was a tireless champion of the downtrodden, the misunderstood, those who are discriminated against or otherwise picked on. Kristi’s example of kindness, and defense of the underdog is something we will try to emulate in memory of her. She is survived by her husband Raymond, and children Betsie (Brian) Jensen of Hyrum, Utah, Mycalah (Matthew) Knighton of Logan, Utah, three grandchildren, Taylor, Zoey and Dezmond, her siblings Greg (JoAnn) Briscoe, Brian ( Linnea) Briscoe, and Allyson (Brett) Cragun. She was preceded in death by her daughter Hilary Peterson, her parents, Jay Lewis and Betty Lou Briscoe, her older sister LuAnn Briscoe and her Mother-in-law, Dorothy Robinson. Services are under the direction of Allen-Hall Mortuary. The funeral will be Friday March 4, 2022, at 11:00 a.m. with a viewing from 10:00-10:45 a.m. at the Church of Jesus Christ of Latter-day Saints located at 360 West 3200 South, Nibley, Utah. Interment will take place in the Portage City Cemetery, in Portage, Utah. Memories can be shared online at www.allenmortuaries.com For those wishing to join the service virtually the link is: https://zoom.us/j/99527735622

Our beautiful wife, mother, grandmother, sister, aunt and friend, Kristi Lynn Briscoe Galloway returned to the loving arms of her Heavenly Father, her daughter Hilary, her parents, her older sister, and her mother-in-law on February 26, 2022,... View Obituary & Service Information

Send flowers to the Galloway family.