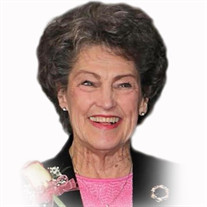 The beloved matriarch of our family, LaConna Purser Hoggan, 89, passed away peacefully at her home in North Logan on Friday, January 28, 2022. LaConna was born at home on November 23, 1932, in Hyde Park, Utah, to William Villis and Christina Avon Woolf Purser. She was born into humble circumstances but was raised in a loving home along with her three brothers. She had happy memories of growing up with her Woolf cousins and many wonderful friends. LaConna attended school in Hyde Park, Smithfield, and Richmond, and graduated from North Cache High School. She excelled in school, was an honor student, and was very involved in extracurricular activities. As a senior she served as the student body vice president and was chosen to be the FFA’s “Sweetheart.” Many lifelong friendships were made during this time. Following high school graduation, LaConna enrolled at Utah State Agricultural College (Utah State University), where she was chosen “Sweetheart “of the Sigma Chi fraternity and elected as freshman class secretary. As a junior she was crowned as the Junior Prom Queen. As a senior she served as student body secretary. She graduated with a degree in Secretarial Science and Secondary Education, with a minor in Home Economics. She took great pride in the fact that she received her education by working hard and paying her own way. LaConna always said her first “real” job was picking beans for her neighbors. She worked digging potatoes, topping and thinning beets, tromping hay, and picking fruit. Later, she put her secretarial skills to use for Utah State Agricultural College’s extension service and sociology department, at the State Capitol building for the Utah Industrial Fund, for General Motors, and as a private secretary at Kennecott Copper. Following her graduation, she taught school at Murray High School. LaConna married her sweetheart, L. Brent Hoggan, on June 20, 1956, in the Logan Utah Temple. They became the parents of six children. After her marriage, LaConna taught school at Logan High, Irving Jr. High, and Highland High Schools while Brent completed his pre-law preparation at Utah State and law school at the University of Utah. She retired from teaching and became a full-time wife and mother after Brent graduated from law school and the family took up residence in Salt Lake City. In 1964, Brent joined a law practice with Charles P. Olson in Logan, Utah, and the family moved to Logan and began building a home in North Logan. It was there that the Smiling H Ranch was born, and it was there that they lived, farmed, and raised their six children. LaConna had a special radiance about her. She possessed a happy and optimistic disposition which endeared her to all she associated with. Her words were always positive and encouraging, her outlook on life joyful. Her beautiful smile was her crowning beauty, and she was as beautiful on the inside as she was on the outside. LaConna was a devoted and loving wife, mother, and grandmother. Her home was always warm and inviting, a place we all loved to be. She was a beautiful and gracious hostess and loved nothing more than to bring delight and joy to her family. She was an excellent cook and matchless homemaker; a mother and grandmother extraordinaire. There was always ice cream in the freezer, cookies in the cookie jar, and M&Ms or gummy bears in the cupboard. Her Saturday morning breakfasts were legendary. She was famous for her cinnamon rolls, Texas sheet cake, cherry and banana cream pies, raspberry cheesecake, and hot rolls. Her life was spent serving and ministering to others. She was always the last one to sit down to the table. Her heart was full of unconditional love for everyone. At the death of a ward member, neighbor, or friend, she was always the first one on the doorstep with a pan of her signature cinnamon rolls. Community service was important to LaConna. She served many years in the PTA while her children attended school. She was instrumental in the naming of Greenville Elementary. She was a member of the Cache Republican Women, the Lady Lions Club, and Daughters of Utah Pioneers. Most recently she served on the North Logan City Cemetery committee in the planning and dedication of the North Logan Cemetery. LaConna was a member of The Church of Jesus Christ of Latter-day Saints and served faithfully in many capacities. The capstone of her Church service was serving as an assistant matron with her husband in the presidency of the Logan Utah Temple. She left as her legacy to her family a strong testimony of the gospel of Jesus Christ. LaConna is survived by her husband and five of her children: Robinette (Bill) Jensen; Brad (Dacei) Hoggan; Paul (Kari) Hoggan; Christina (Gary) Folsom; and Julie (Stacy) Nelson; and a beloved sister-in-law, Lois (Gary) Purser. She was preceded in death by her parents; her three brothers, Ronald, Ramon, and Gary Purser; and by her son Kirt W. Hoggan. The family wishes to extend a special thanks to Gaby, Jen, and Shannon from Hospice for the tender care and respect they showed to Mom during the last week of her life. They provided an invaluable service to the entire family. Funeral services will be held at 12:00 noon on Saturday, February 5, 2022, in the North Logan Stake Center, 2750 North 800 East, North Logan. A viewing will be held on Friday evening, February 4th, from 6:00 to 8:00 p.m. at the Allen Hall Mortuary, 34 East Center, Logan, and from 10:30 to 11:30 a.m. at the North Logan Stake Center prior to the Saturday services. Interment will be in the Hyde Park Cemetery. In lieu of flowers, the family suggests a donation to the LDS Humanitarian Aid Fund. The family asks that all who attend the viewing and funeral to wear a mask and keep physical contact to a minimum. Zoom Link: https://us02web.zoom.us/j/87956148566?pwd=a3JWUEZXbnEyaUtUNGhHcnNVcGM0Zz09 Password: laconna

The beloved matriarch of our family, LaConna Purser Hoggan, 89, passed away peacefully at her home in North Logan on Friday, January 28, 2022. LaConna was born at home on November 23, 1932, in Hyde Park, Utah, to William Villis and Christina... View Obituary & Service Information

The beloved matriarch of our family, LaConna Purser Hoggan, 89,...

Send flowers to the Hoggan family.