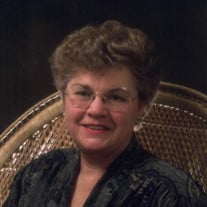 Lael “S” Allen Feller passed away on Palm Sunday, April 5, 2020 in Logan, Utah. She was born October 15, 1932, to Levi and Elsie Skidmore Allen, at home in Cove, Cache Valley, Utah. She graduated from North Cache High School and Seminary. She attended BYU and USU and graduated from the LDS Institute at USU. She married Val R. Feller in the LDS Logan Temple on July 16, 1952. After a brief Army assignment in Berlin, they moved to Caldwell, Idaho. They were blessed with six children. She loved being a homemaker, supporting her children and husband in their activities. She spent 12 years working at Valley Floral and enjoyed taking flowers to others. She was a greeting card merchandiser for 20 years at Paul’s in Caldwell and Nampa. Lael served faithfully in many stake and ward leadership callings in the Church of Jesus Christ of Latter-day Saints. She served over 20 years in Primary, 20 years in Relief Society, and 20 years in music callings, often simultaneously. She served as a dependable Visiting Teacher for many years. She loved semi-classical music, hymns and children’ s songs. She played the organ, piano, & directed music and sang in choirs. She felt a deep love for her Heavenly Father, and our Savior, Jesus Christ. Lael is survived by her six children: DeAnn Warrick (ID), Melanie Petersen (KS), Carolyn Walker (NC), Kurt A. Feller (ID), Anita Shuman (UT) and Lori MacGregor (OR). She has 22 grandchildren and 31 great-grandchildren. She also said, “Our grandchildren are the melodies and blossoms of my life and the great- grandchildren are like fluttering butterflies.” Lael also leaves behind a beloved sister-in-law LaDawn Allen, a dear friend whom she considered an adopted daughter, Anita Norris Bake, and many nieces and nephews. She was preceded in death by her only sibling, Seth, and her husband, Val Ray Feller. Lael will be interred at the Canyon Hill Cemetery, Caldwell, ID. Funeral directors are Allen-Hall Mortuary, Logan. The Feller family extends gratitude to all who were so kind and helpful to our mother through the years, especially staff of Terrace Grove Assisted Living in Logan, UT who cared for her during her final years. In lieu of flowers, donations can be made to Lael’s favorite charity: Primary Children’s Hospital, 100 North Mario Capecchi Dr, SLC, Utah 84113. Condolences and memories may be shared online at www.allenmortuaries.com

The family of Lael "S" Allen Feller created this Life Tributes page to make it easy to share your memories.

Send flowers to the Feller family.