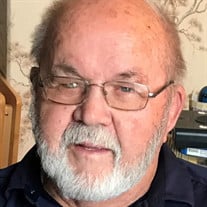 LaMoine “Wick” Wickham, 80, passed away unexpectedly at home on June 13, 2020. He was born October 4, 1939, in Logan, Utah, to Montell & Margretta Wickham. He attended Logan City Schools, where he graduated from Logan High School in 1957. He married his high school sweetheart Karen Joyce Hall on Nov. 26, 1957. They were sealed in the Logan temple in June 1964. He was a devoted and loving husband for 63 years, and they were blessed with 5 wonderful children. LaMoine was an active member of the Church of Jesus Christ of Latter-day Saints where he held many callings. LaMoine was a hard worker. He spent 30 years working for Logan City, in addition to maintaining several different part time jobs. Even after his retirement he continued delivering pizza for Dominos. It brought him great joy to continue being a part of his community. LaMoine was an avid sports fan. Not only did he watch every sport he could on television, he also played golf for over 20 years and participated in bowling leagues for over 50 years. This is where he met many of his lifelong friends. He loved to travel with his family and especially enjoyed camping, grilling, and helping to host the Wickham Family Reunion. He was adored by everyone who met him regardless of his claim to be, “mean, ornery, and cantankerous.” In his later years he enjoyed spending his mornings at Center Street Grill where the staff became his extended family. As a favorite customer they honored him with his own menu item called “The Wickster.” He will always be remembered for his contagious smile, strong embrace, and gregarious personality, as well as his complete devotion to his family. LaMoine is survived by his wife Karen Hall Wickham, children Valarie (Dirk) Kotter, Glen (Shelly) Wickham, Natalie (Micheal) Blake, and Darrin (Lisa) Wickham, Brothers Deloy (Shirley) Wickham and Wayne (Cerina) Wickham, as well as 23 Grandchildren and 23 Great Grandchildren. He was preceded in death by his son Scott LaMoine Wickham, Grandson Scott John Wood, his parents, and siblings LaWana (Steve) Farner and Clair (Bonnie) Wickham. Graveside services will be held Thursday, June 18 at 12:00 p.m. with a viewing an hour prior at The Hyrum Cemetery. Services under the direction of Allen Mortuary. The service may be viewed live by following this link the day of the service. https://us02web.zoom.us/j/87619051543

The family of LaMoine "Wick" Wickham created this Life Tributes page to make it easy to share your memories.

Send flowers to the Wickham family.