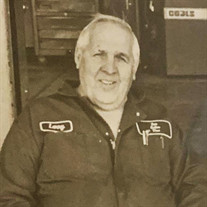 Larry Don Bodrero lived a life of hard work and service. His mechanical skills were freely given to aid countless folks he came into contact with through his employment or friends and community. Larry was the last child born to John George Bodrero and Kate Larsen Bodrero in Wellsville, Utah on October 21, 1939 where he found nine siblings to love and spoil him. Larry attended school in Wellsville and Hyrum, Utah graduating from South Cache High School in 1958. As a teen he worked as a farm hand irrigating, hauling hay, thinning, hoeing, and harvesting sugar beets and hand-milking cows. His spare time was devoted to his buddies and his beloved cars; a sleek ‘56 Ford convertible for fun, a ‘59 Ford for racing. Larry married Tanna Perkes in 1960. They produced three fine sons, Rick, Shane and Troy, but later divorced. Also, in 1960 Larry began his lifelong career as a tire specialist and mechanic for Baugh Motor in Logan, Utah. He then moved to Logan Tire where he was a faithful employee for 38 years. He also worked for Ron Keller Tire thereafter. Larry became lifelong friends with many of the customers he supplied service for through the years. His work was his life until he met and married Judy Kippes in 1986. She told him that if they were to have a life together he would have to spend time at the stream fishing. That they did as they went camping and fishing often in their camp tailor. They also loved exploring on their ATV. During one of the three summers they spent in Orofina, Idaho, Larry pulled out an 18 pound salmon on his very first try at salmon fishing! Larry and Judy resided in Richmond where they enjoyed a spacious and beautiful yard. Larry enjoyed a group of friends who met regularly for morning coffee and “news” at LD’s Café. He was a member of The Church of Jesus Christ of Latter-day Saints. Larry is survived by his wife, Judy; sons, Rick (Nancy) of Arizona, Shane (Kathleen) of Massachusetts, Troy (Christi) of Arizona, and daughter Tina West of Smithfield; sister, Marlene Coombs; sisters-in-law, Theone Bodrero and Shirley Bodrero; and several grandchildren and great-grandchildren. Services will take place Tuesday, February 2, 2021 beginning at 11:00 AM at Allen-Hall Mortuary, 34 East Center in Logan, Utah with a viewing prior from 9:30 to 10:30am. Services will be livestreamed and may be viewed at: https://us02web.zoom.us/j/83787792615?pwd=V2pEM0NSeE9pb09ZWFdDYUg2NmhUdz09 Password: Larry

Larry Don Bodrero lived a life of hard work and service. His mechanical skills were freely given to aid countless folks he came into contact with through his employment or friends and community. Larry was the last child born to John George Bodrero... View Obituary & Service Information

Larry Don Bodrero lived a life of hard work and service. His...

Send flowers to the Bodrero family.