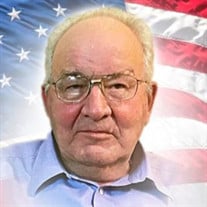 Willard Lee Wasden Bailey was born on April 6, 1934, to Leslie Bradshaw Bailey and Olive Bailey, in the family home in Wellsville, Utah. He passed away on July 9, 2021, in Logan, Utah. Lee attended Floradell Elementary School, Wellsville Junior High School, and South Cache High School, graduating on May 29, 1952. As a child, Lee was active with the family farm and 4-H. While in high school, Lee was active in FFA. He also played football, softball, and basketball, and was on the track team. He was elected President of the Junior Class as well as King of the Sweetheart Ball. Following high school, Lee entered the military, joining the Army where he served as a combat engineer. He attended basic training and combat engineer training at Fort Lewis, Washington, followed by orientation at Ford Ord, California. He was also sent to Aberdeen Proving Grounds in Maryland for welding training. After returning from the military, Lee attended Utah State University where he played football, majored in Animal Science, and minored in Chemistry. On August 26, 1955, Lee married his sweetheart, Shirlene Tracy Haslam. The couple were married in the Salt Lake Temple and lived in Wellsville nearly their entire married lives. In 1958 Lee began working for Thiokol as an engineer. While at Thiokol, Lee received many honors and awards and was proud to have worked on many projects including the shuttle booster program. He retired from Thiokol after 35 years. Lee was also a lifetime farmer and loved being on and working on the farm. Lee continued farming until he was 80 years old. Lee was active in the LDS church and served in many different callings throughout his lifetime. He was also active in the community, serving on the Wellsville City Counsel for eight years. Lee and Shirlene are the parents of five children: Tracy (Deb) Bailey, Gay Ann Henson, Ruth (Bob) Boehme, Debbie (Perry) Maughan, and John Bailey. They have 18 grandchildren and 30 great grandchildren. Lee was preceded in death by his parents, his younger brother, Reed Bailey, and one grand-daughter, Michelle Maughan, and one brother-in-law, Paul Bailey. He is survived by his sweetheart, Shirlene, his children, one brother, Don Bailey, and three sisters, Karen Dickerson, Olive Tracy, and Becky Bailey. Final arrangements are under the direction of Allen-Hall Mortuary. A viewing will be held on Thursday, July 15, 2021, from 10:00 a.m. to 11:45 a.m. at the Wellsville Stake Center, 30 South Center, Wellsville, Utah. Funeral services will follow the viewing at 12 noon. Burial will be in the Wellsville Cemetery. Services will be livestreamed and may be viewed via the following link. Join Zoom Meeting https://zoom.us/j/91083784431?pwd=VXpPZHBjd2VETTI0VEdzTG1HYmRXQT09 Meeting ID: 910 8378 4431 Passcode: 512679

Services will be livestreamed and may be viewed via the link at the bottom of the obituary.

Send flowers to the Bailey family.