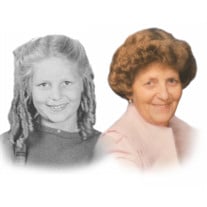 Lena Mae Muehlfeit Korth passed away with her loving family near on January 2, 2022 at the age of 91. She was born August 6, 1930 in Coltman, Idaho, the daughter of August and Ida Mary Hecker Muehlfeit. She was married on August 6, 1953 to Don Robert Korth in the Idaho Falls Temple. Lena Mae grew up in Coltman, Idaho as the youngest of five children. She had a happy childhood and shared fond memories of growing up with her family during the depression and World War II. She grew up next to both sets of grandparents and loved living next door to her elementary school. She shared memories of working on the family potato farm, herding cattle, swimming in the canal, playing sports with her brother, and being impacted by seeing a brother and many friends go off to war. She remained deeply connected with her family and country throughout her life. After graduating from High School, she and several of her best friends attended Utah State Agricultural College where she worked at the Creamery and developed a life-long love of Aggie Ice Cream. She eventually decided to major in elementary education. Upon graduation she taught school in North Logan and then in Salt Lake City. While finishing her degree, Lena Mae met Don, who eventually became the love of her life and beloved husband of 65 years. Don and Lena Mae were married shortly after she graduated on August 6, 1953. After their marriage, they lived in Seattle and Spokane, WA, Boise, ID, and Garland, Provo, and Mapleton, UT. While supporting Don in his business and farming ventures, Lena Mae became the loving mother to five children and the center of the family’s world. She prioritized family above all things. She supported kids’ schooling, music lessons, sporting activities, scouting, church participation and led family social activities. In 1966, she and Don purchased 65 acres in Mapleton which became their paradise and permanent home. Mapleton provided the setting for their family to be raised with opportunities to work, and to enjoy farm animals and open spaces. Their home in Mapleton became the hub of all family activities for over 50 years. Lena Mae loved people and has had many friends and family that have stayed connected with her throughout her life. As she and Don aged, they elected to move to North Logan where Lena Mae has lived since 2017. There she benefited from numerous new friends, a loving ward, a bike riding gang, and proximity to many family members. Lena Mae was a faithful member of the Church of Jesus Christ of Latter-day Saints and served in the young women organization for many years where she was able to connect with, and support countless youth. After retirement, she and Don served several missions and remained active and faithful in church service. Those who know Lena Mae benefited from her sense of humor, unconditional love and service, genuine concern for those most in need, and unwavering belief in eternal families. Lena Mae is survived by her five children, Diane (Reid) Gunnell, Brian (Leslie) Korth, Rhonda (Scott) Ridge, Paul (Lorelei) Korth, and Mark (Carrie) Korth; 21 grandchildren and 47 great-grandchildren. She is preceded in death by her husband, her parents and her siblings, Ella, Roy, Maxine, and Paul. Visitation Services will be held on Friday, January 7, 2022 from 4:00 to 5:30 p.m. at Allen Mortuary or North Logan located at 420 East 1800 North, North Logan, UT. Funeral services will be held Saturday, January 8, 2022 at 12:00 p.m. at the Mapleton Church located at 825 Hawks Rest Dr., Mapleton, Utah. A viewing will be held that morning from 10:30 to 11:30 a.m. Lena Mae will be buried in the Mapleton Cemetery. Services will be livestreamed and may be viewed via the following link: https://us02web.zoom.us/j/87567882133?pwd=amFCWjBLVElZRTZLYUVpaDBaNWRVZz09 Password: Korth In lieu of flowers, the family suggests doing an act of service or making a donation to Primary Children’s Hospital at https://intermountainhealthcare.org/primary-childrens/give/gifts-in-kind/.

Lena Mae Muehlfeit Korth passed away with her loving family near on January 2, 2022 at the age of 91. She was born August 6, 1930 in Coltman, Idaho, the daughter of August and Ida Mary Hecker Muehlfeit. She was married on August 6, 1953 to... View Obituary & Service Information

Services may be viewed here: https://us02web.zoom.us/j/87567882133?pwd=amFCWjBLVElZRTZLYUVpaDBaNWRVZz09

Lena Mae Muehlfeit Korth passed away with her loving family near...

Send flowers to the Korth family.