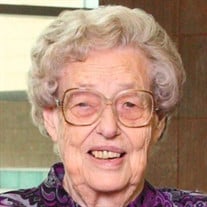 Lila Murri Eddington, 98, of North Logan, Utah passed away Friday, December 4, 2020 at Logan Regional Hospital. She was surrounded by her children at her death. Lila was the daughter of Charles Christian Murri and Eliza Ann Stimpson. She was born February 23, 1922 near Wilford, Idaho. She married her high school sweetheart Blaine Dalling Eddington on January 30, 1942 in the Logan Temple. Together they had 9 children. Adventure started quickly as Blaine enlisted in the Navy for WWII. Their first few years were in San Francisco, then Virginia Beach, Virginia, then Fort Lauderdale, Florida. After the war, they raised their growing family moving Idaho, Miles City, Montana, then Great Falls, then Bloomington, Minnesota. The family loved to camp, hunt, and fish. When Blaine died an untimely death in 1970, Lila moved with her children to North Logan. The family quickly became part of the North Logan neighborhood and community. Lila worked as a secretary at USU, then later at Wurlitzer, then later was the North Logan city treasurer and recorder. In her retirement years, Lila doted on family. She knew the names and birthdays of all 163 descendants and spouses. She remembered every birthday with a card, special birthdays with some money, and Christmas with a handmade gift. She made hundreds of Christmas decorations for grandchildren. She was big on reunions, which were to be called “parties” to not be so stuffy. Every year children and grandchildren came from all over to build the family togetherness. Lila loved family history. She researched her family lines back many generations and kept dozens of binders with information. She volunteered as a family search indexer, and personally indexed and arbitrated over 950,000 names, with a goal of reaching one million. Lila served in many capacities in her church. She was active in The Church of Jesus Christ of Latter-day Saints. She served as a Relief Society president, in Primary presidencies, as a Sunday School teacher, in the Young Womens organizations, taught early morning Seminary, was a music director, choir director, and most recently the writer of the weekly bulletin. Lila enjoyed serving others. She crocheted over 2,000 hats which she gave to different charities. Lila’s favorite hobbies were her garden, daily crossword puzzles, and watching the Jazz. She knew every player and every referee. Lila was preceded in death by her husband Blaine, sons Kent and Randy, grandchildren Keith and Heather, and great-grandchildren Owen and Cambry. She is survived by sister-in-law Velma Eddington, sons Gary (Virginia), Brian (Melva), Scott (Paula), Darrell (Jolene), Paul (Karen), David, daughter Leanne Cragun (Brian); 58 grandchildren and spouses; and 87 great-grandchildren and spouses. Funeral services are by invitation only on Wednesday, December 9 in North Logan. She will be buried in the family plot in Sugar City, Idaho. No viewing is planned. In lieu of flowers, memorials are suggested to Lila’s favorite charity LDS charities ( https://donate.churchofjesuschrist.org ). The family invites you to add your own stories and memories of Lila.

Lila Murri Eddington, 98, of North Logan, Utah passed away Friday, December 4, 2020 at Logan Regional Hospital. She was surrounded by her children at her death. Lila was the daughter of Charles Christian Murri and Eliza Ann Stimpson. She... View Obituary & Service Information

The family of Lila Murri Eddington created this Life Tributes page to make it easy to share your memories.

Send flowers to the Eddington family.