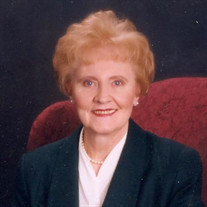 Lila Rita Mouritsen Leonhardt, 92, passed peacefully with family surrounding her, Sunday, March 6, 2022, at Maple Springs Assisted Living in North Logan, Utah. She was born March 4, 1930, at the family home in Logan, Utah to Joseph Wilford (JW) Mouritsen and Hulda Delilah (Lysle) Holst Mouritsen. Rita’s older sister, Helen, was four and a half years older and in all appearance was a duplicate twin. On that spring morning her father was planting the garden and Helen desperately wanted a baby brother. That desire for a brother must have rubbed off as she was a “Tom Boy” in her early years. She and Helen loved to play Cowboys and Indians with the other kids in the neighborhood. In the orchard behind the family home, they could be found building a fire, frying bacon and cooking eggs as they pretended to camp. Playing football with the boys and softball were other favorite past times. Rita and Helen also loved to ride bikes, horses, roller skate and ice skate in the winter every day after school at Central Park (Merlin Olsen Park). Their mother always wanted to give Helen and Rita dolls and buggies, but they had no interest. “We wanted cowboy guns, holsters, boots and hats.” On Saturdays they would see matinees featuring cowboys with white cowboy hats and riding beautiful horses. They had beautiful handled guns with pearls (2 of them) in a holster on either side of their hips. Rita graduated from Logan High School and enjoyed participating in sports activities, singing in the girl’s chorus, and attended Utah’s first Girl’s State. Eventually her dark hair lightened to blonde, and her large blue eyes worked to her favor as she was a prom queen candidate labeled one of USAC’s loveliest. Many male callers “called on” Rita for many years. In 1952, Rita graduated from Utah State Agricultural College (now Utah State University) with a major in Elementary Education and minors in English, History, and Sociology. It was there she met her future husband, Merlin in a US History class. After graduating, Rita taught first grade in Wellsville for two years then was called to serve a mission in the Central States. After returning, she worked at Thiokol while continuing a lengthy courtship with Merlin Leonhardt (Providence) while he lived in California. In 1960, her dad passed and shortly thereafter Rita’s mother had a stroke requiring constant care. Rita’s father owned M&L coal company in Logan and responsibilities rested with Rita and Helen to take care of the business. Helen moved to Scotland shortly thereafter and this became the necessary full time employment. After a long courtship, Merlin married Rita Mouritsen in the Logan Latter-Day Saint Temple on July 18, 1968. Moving to California was difficult for Rita as she loved Logan. ““Where in the world could you go for a ride in Los Angeles?” Logan canyon, friends, drives, Bluebird restaurant and hamburgers from Maddox drive-in were all put on hold as she moved (while still caring for her mother) to California. Children, dear friends, and close relatives were always a delight to Rita. Eventually, Rita and Merlin were blessed with two daughters, Sandra (B. Craig) McAllister of Logan and Kristy (Kevin) Fry of Bluffdale, previously married to Brent Thomas of Logan. Each daughter has three daughters and one son. Serving others, creating beautiful family gatherings, art, literature and music, and putting others needs above her own were trademarks. Rita and Merlin returned to Logan and were called as service missionaries at the LDS Employment Center. Fishing and picnics in Logan canyon could now be resumed. She was a member of Belletrist, and Clerisy literary clubs. Rita loved being a Daughter of the Utah Pioneers, caring for grandchildren, and serving in Relief Society. Merlin preceded Rita in death by just 6 weeks. As a family we are comforted that they are together as sweethearts. A true love story. Rita loved and enjoyed her husband, children, grandchildren, and dear friends. She was known not to complain and to find joy in even the most challenging circumstances. Funeral services will be Friday, March 11, 2022, at 2:00 pm at Allen-Hall Mortuary. 34 East Center Street, Logan, Utah. A Viewing will be preceding the funeral from 12:30 - 1:30 p.m. Interment will be in the Logan City Cemetery. Funeral services will be livestreamed and can be viewed via the link below (password: Rita): https://us02web.zoom.us/j/88133351070?pwd=M05Td2ZkU0lIT0llMmQ0Rng3SUpqQT09 Condolences may be shared at www.allenmortuaries.net.

Send flowers to the Leonhardt family.