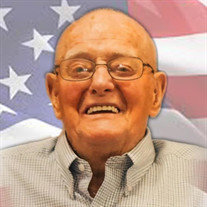 Loyd A. Lewis left this world to be with our Father in Heaven on January 13, 2021 with his family by his side. He was born September 20, 1925 in Lewiston, Utah to Merlin and Bertha Lewis. He was preceded in death by his wife, Fern Armstrong Lewis, his parents Merlin and Bertha Lewis and his siblings, Ina Denson, Dick Lewis, Reed Lewis, Max Lewis, Betty Jean Nelson and his identical twin brother Boyd Lewis. His son-in-law Neil Jensen, his grandsons Cody Bassett and Travis Dennis. Dad’s goal was to out live all of his siblings, which he accomplished. Loyd and Boyd used the fact that they were identical twins to their advantage and were always playing tricks on others. If one of the twins got hurt the other would feel it and when taking tests they would always get the same answer wrong. At the age of 17 they wanted to join the Marines and had to have permission from their parents to join. Loyd and Boyd were able to serve in the Marines together and on February 25, 1945 at a battle on Iwo Jima, Boyd lost his life. The events of that day affected Dad for the rest of his life. Dad was so proud to be a Marine and he loved his country. He was so fortunate to be honored many times for his service and was able to go to Washington, DC with Honor Flight. He was so proud to wear his Marine uniform and was able to give out flags to other deserving military families. Dad was a jack of all trades, he was a boxer, a rodeo clown, a teacher, he worked on various dairy farms including the church farm in Cove, Utah. He was a house mover and was able to work for Utah State University in their Agricultural department. He also worked at Palatial Living for many years with his good friend Wally. Dad was a member of the Church of Jesus Christ of Latter Day Saints. He held various positions, was also able to work in the temple, but probably his favorite calling was being a greeter. Dad loved to visit and most of all to give hugs to everyone. He is survived by his six children, Vicky (Neil) Jensen, Tammy (Jack) Houser, Patricia (Garth) Wilde, Boyd (Wendy) Lewis, Laurie (Blake) Bassett and Melanie Carchano. He also leaves behind 13 grandchildren and 34 great grandchildren and 1 great-great grandchild. Funeral services will be held on Saturday, January 23, 2021, at the Allen-Hall Mortuary, 34 East Center Street, Logan, Utah at 11:00 am. There will be a viewing from 9:00 -10:30 am for family and close friends. Military Honors to follow at Preston Idaho Cemetery. Services will be livestreamed, and may be viewed via the following link:https://us02web.zoom.us/j/88319066092?pwd=S0pEUFcrNFFKeTBVRGYrM0RFK1h0UT09 Password: Lewis

Loyd A. Lewis left this world to be with our Father in Heaven on January 13, 2021 with his family by his side. He was born September 20, 1925 in Lewiston, Utah to Merlin and Bertha Lewis. He was preceded in death by his wife, Fern Armstrong... View Obituary & Service Information

Loyd A. Lewis left this world to be with our Father in Heaven...

Send flowers to the Lewis family.