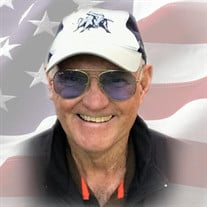 On Sunday, November 21, 2021 the world and our family lost one of the finest human beings ever born. Cary Watkins was an amazing man, loving father, grandfather, husband, and friend. Cary was passionate about everything he was involved with. As a Marine in Vietnam, he flew more combat missions than any other Marine officer throughout the war as a fixed-wing aviator during his first tour and a helicopter pilot in his second. He also flew Henry Kissinger to the Western White House to plan and execute the transition of power in the days before President Nixon resigned. He was awarded the Silver Star, two distinguished Flying Crosses, and a Purple Heart, amongst many, many other medals. The way in which he served our country is the same way he lived his life—with passion. After 20 years of service, he retired to Apple Valley, California and became a successful business owner. He served as president of the Victor Valley Board of Realtors, CAR/NAR executive committees, and on the board of Victor Valley Community Hospital. He was inducted into the Gallery of Achievement, an honor given to outstanding alumni from Brecksville High, Ohio. It was in Apple Valley that he met and married Lucy Peterson on July 4, 1993. In 1999 Cary and Lucy moved to North Logan, Utah. Determined to make a difference in his new town, he ran for mayor, won, and helped put North Logan on a solid trajectory for years to come. Under his term, King Park was acquired and developed at the mouth of Green Canyon, 200 East was completed, the North Logan City Center area was designated, and he won a hard-fought battle for round-abouts. Cary and Lucy founded Art on the Lawn, an annual art fair fundraiser (2006-2018) for local high school art programs. Cary was a remarkable and avid handball player well into his eighties and a dedicated golfer. He taught himself to ski later in life, learned Spanish, and to play the piano—skipping the basics and going straight to Jazz. To quote his step-son Carter, “Tell a Marine to move a mountain, hand him a shovel and he will move the mountain! It might not be pretty, but it will move.” Cary moved mountains. Cary, we were so fortunate to have had you in our lives. You were truly a blessing to the world, its thanks would never be requested nor accepted, but presented nonetheless. Rest in peace while you play the back nine at Augusta with Jesus, manicure the gardens with Moses, and sing with Frank Sinatra and the angles. You are missed, you are loved, and you will always be remembered. David Cary Watkins was born in Cleveland, Ohio to Mary McConnell and Theodore Quincy Watkins and was the eldest of five children. After high school he went on to attend the University of Nebraska, B.S., and Pepperdine University, M.B.A. Cary is survived by his wife Lucy, children Sean, Jeff (Judy), and Chris (Trish) Watkins; step-children Kate Randall and Carter (Melissa) Randall; ten grandchildren, and Gwen Watkins (divorced). Siblings Ted (Sue), Lee (Dawn), Sarah, Becky (Tom Zuchowski) Watkins, and loving nieces and nephews. Cary requested only a memorial service, where family and friends will gather on a summer evening. The American and Marine flags will be flying. Taps, the final call of the evening, will echo over the fields of his North Logan home. Semper Fi. Condolences may be expressed online at www.allenmortuaries.com

On Sunday, November 21, 2021 the world and our family lost one of the finest human beings ever born. Cary Watkins was an amazing man, loving father, grandfather, husband, and friend. Cary was passionate about everything he was involved with.... View Obituary & Service Information

The family of Lt. Col. David Cary Watkins created this Life Tributes page to make it easy to share your memories.

Send flowers to the Watkins family.