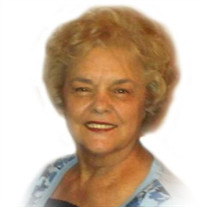 LuDean Allsop Pond Snow Passed away due to causes incident to age June 16, 2021. LuDean was the 6th of 7 children born on March 8, 1939 to Lew Peart Allsop and Velva Jamison Allsop. They were a hard working family on their Trenton Utah farm with chores that extended to all family members. LuDean's mother would offer her a reprieve from chores only if LuDean practiced the piano instead. As a result LuDean became an accomplished accompanist beginning in her ward in the Church of Jesus Christ of Latter-Day-Saints as a Primary Pianist at the age of 11. By the time she was 13 she accompanied her church congregation on the organ and from there spent a lifetime of service in music, serving in callings such as Ward Organist, Ward Choir Director, Ward Music Chairman, Ward Chorister, Stake Chorister and as a Stake Organist two different times. She served in leadership positions in the Primary and Young Women, taught Relief Society, served as a Sunday School Teacher and Seminary Teacher, she also served missions in the Philippines and New Jersey. LuDean married James Marvin Pond on May 29, 1957 in the Logan Utah Temple. Through this union came 8 children. Her children were her pride and joy, making every sacrifice possible for their well being and happy upbringing. After 43 years of marriage, sadly Jim and LuDean divorced, going their separate ways but always being kind and cordial to each other. In 2000 LuDean married Joseph Cowley. Joe and LuDean served a mission to New Jersey. There LuDean spent tireless days teaching piano to members of the church. Through her efforts she was instrumental in transforming the quality of sacred worship through music in the New Jersey area. After the death of Joseph, LuDean married Quinton (Tim) Snow. LuDean rescued both Joe and Tim from a lonely heart after the passing of both their eternal companions and then lovingly served as a ministering angel while caring for them until each of their passing. Both Joe and Tim were loving husbands who provided LuDean with companionship, comfort and true friendship. LuDean's highest characteristic was that of charity and the pure love of Christ. All who came in contact with LuDean felt her sincere love for them. She recognized everyone's potential and deity within. She was a woman of compassion who bore feelings of empathy for those who were less fortunate. She was filled with words of affirmation and sincere complements. All who came to know her would better understand the love of Christ. She is beloved by her children and grandchildren. She is survived by her 8 children Judy Daniels (Galen), Darla Yeates (Cory), Karol Stephens (Lynn), Troy Pond (Teresa), Angela Simmons (Jim), Dan Pond (Kimberly), Dixie Pond (Saryon) and Jayson Pond (Jennifer). 27 Grandchildren and 44 Great Grandchildren. Funeral services will be Saturday, June 19 at 12:00 p.m. at 65 E. Center St. in Hyde Park Utah at the Church of Jesus Christ of Latter-Day Saints. A viewing will be from 10:30-11:30 prior to the funeral at the church. Interment will be in the Logan City Cemetery. Condolences and thoughts may be share online at www.allenmortuaries.net.

LuDean Allsop Pond Snow Passed away due to causes incident to age June 16, 2021. LuDean was the 6th of 7 children born on March 8, 1939 to Lew Peart Allsop and Velva Jamison Allsop. They were a hard working family on their Trenton Utah farm... View Obituary & Service Information

The family of LuDean Allsop Snow created this Life Tributes page to make it easy to share your memories.

LuDean Allsop Pond Snow Passed away due to causes incident to...

Send flowers to the Snow family.