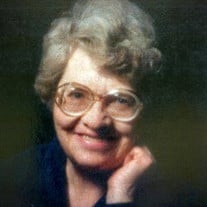 Lula Clark DeValve, age 95, passed away on October 27, 2020. Lula was born June 25, 1925 in Georgetown, Bear Lake County, Idaho. Her parents were Melvin J Clark and LaReva Bacon Clark. She graduated from Georgetown High School in 1943, where she was Valedictorian of her class. She obtained a Bachelor of Science Degree in elementary education from Utah State Agricultural College in 1947, a Master of Arts Degree in Music Education from Teachers’ College, Columbia University in 1952, and a Master of Education Degree in Instructional Media from Utah State University in 1976. Lula spent 30 years teaching kindergarten and primary grades in public schools in Utah, California, Germany (for the U.S. Air Force), and finally in Anchorage, Alaska. She was married in 1961 to Albert Steihler DeValve and later divorced. After retirement from teaching, she moved to Logan, Utah, where she cared for her aging parents for several years. She was active in the Logan community, and participated and volunteered in many community organizations. These included the American Guild of Organists, the Cache County League of Women Voters, the Daughters of the Utah Pioneers, the Northern Utah Choral Society, and she was on the board of the Chamber Music Society of Logan. She served various times as secretary or executive officer for several of these organizations. In 1999, she received a ‘Women over 65 Achievement Award’ in recognition of ‘Excellence in Community Service and Personal Achievement’ from the Utah State University Women’s Center. Also in Logan, she studied organ for 10 years, and was an active member of the Church of Jesus Christ of Latter-day Saints. She served in many different church callings through the years including, teacher, ward organist, visiting teacher and choir member. In 2003 she compiled and wrote a 25 year history of the Logan 27th Ward. In 2008 she compiled and wrote an extensive family history of the Clark Family. She loved music, books, art, needlework, and kept abreast of current events. She also loved to see the world, and travelled extensively in the U.S., Canada, Europe, Russia, Israel, Mexico, and southeast Asia. As a member of the Northern Utah Choral Society, she was blessed to be able to travel and sing in the leading concert halls of New York City, Washington, DC, Hawaii, Moscow, and St. Petersburg. She is preceded in death by her parents, sister Gail Clark Halisky, brother’s Melvin Vernell Clark and Kerry Dunn Clark who died in infancy. She is survived by sister Beryl Clark Wheeler, brother Sheldon LaMar Clark, and numerous nieces and nephews who loved her. The family will hold a graveside service in Georgetown, Idaho, Saturday, November 7, 2020. Condolences may be sent to: Lisa Collishaw, 106 NW F St. #189, Grants Pass, OR 97526

The family of Lula Clark DeValve created this Life Tributes page to make it easy to share your memories.

Send flowers to the DeValve family.