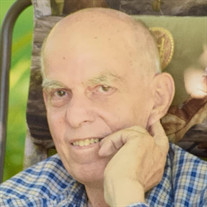 Lynn Elwood, aged 81 from Hyde Park, Utah, was peacefully reunited with his beloved wife on April 29, 2022. He was born on December 12, 1940 in Logan, Utah to Dallas and Laura Robbins Elwood. He attended Cache County schools and graduated from North Cache High. He served a mission for The Church of Jesus Christ of Latter-day Saints in the Alaska-British Columbia Mission from 1961 to 1963. Shortly thereafter, he joined the National Guard where he served six years in the 145th Field Artillery of Utah. On July 7, 1967 he was sealed to the love of his life, Lucile Lamb, in the Logan, Utah Temple. Together they had five children, whom he adored. He spent his family time doing outdoor activities with his kids including four-wheeling, working in the yard, and target shooting. After the untimely death of his dear wife at the age of 36, Lynn stepped up as full-time parent. It was during this time that he also fought many medical ailments including recurring cancer. Despite these challenges, he remained an attentive and devoted father, working and raising his children on his own. He continued to be his children’s biggest support throughout their adulthood while also becoming the world’s best grandpa. He spent the majority of his career in the Utah State University Housing Department where he was in charge of maintenance and used his handiwork skills on facility projects. During retirement he was often found in his shed, which he built. He would spend his time using his craftsman talents creating beautiful furniture and toys for his grandchildren. He was proceeded in death by his beloved wife, Lucile Lamb Elwood; parents; brother, Arlo Elwood; and mother-in-law, Helen C. Lamb. He is survived by his children: Rodney (Kerry) Elwood; Robert (Stephanie) Elwood; Renee (Randall) Elwood; Raelyn (Darren) Burnett; Rebecca (Michael) Fairbanks; 18 grandchildren; two great grandchildren; his brother, Dean Elwood; and four sisters-in-law. Funeral services will be held at 12:00 pm on Wednesday, May 4th, 2022 at the Hyde Park 10th Ward Chapel at 42 West 200 South in Hyde Park, Utah. Prior to the funeral, a viewing will be held for the public from 10:30 to 11:30 am at the same location. Interment will be held at the Hyde Park Cemetery. The family would like to thank all the many people who provided care during his illnesses, especially from the staff at Logan Regional Hospital and Intermountain Homecare and Hospice. TO LISTEN TO THE AUDIO RECORDING OF THE FUNERAL SERVICE - CLICK HERE

Lynn Elwood, aged 81 from Hyde Park, Utah, was peacefully reunited with his beloved wife on April 29, 2022. He was born on December 12, 1940 in Logan, Utah to Dallas and Laura Robbins Elwood. He attended Cache County schools and graduated from... View Obituary & Service Information

The family of Lynn Elwood created this Life Tributes page to make it easy to share your memories.

Send flowers to the Elwood family.