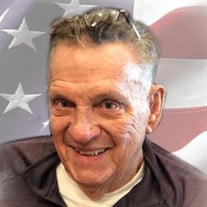 Lynn (Slim) Hicken passed away January 29, 2021, after a valiant fight with cancer. Dad was born February 2, 1943, in Heber City, Utah to Marion Carlile and Dean Hicken. He moved from Heber City to Logan as a young child, and his family eventually settled in River Heights. He graduated from South Cache High School in 1961 and served in the 889th Quartermaster Company of the U.S. Army Reserves for six years. During this time, he also attended Utah State University. He married Ann Marie Moser August 30, 1968, and they raised three beautiful daughters in a home they built together in Providence. After high school, Dad worked for Western Electric where he traveled from Oregon to Michigan as an installer. In 1968, he began working for his dad at the Kater-Shop, a family-owned men’s clothing store in Logan. He was a committed advocate for downtown and small business for 44 years. Dad was a true haberdasher, and his appearance showed it. He could fit anybody who came into the store and would go to great lengths to find just the right tux, suit, or pair of shoes for customers. He may have owned a men’s store, but he was the best girl dad ever. He hauled us to dance and piano lessons, fixed our hair, and helped us choose the perfect outfits all while teaching us the value of hard work and how to mow the lawn in a straight line. He was our biggest champion. To know Dad was to have a friend forever. He was one of a kind, and people immediately felt comfortable in his presence with his gift of gab and incredible sense of humor. He cultivated deep relationships with employees, customers, neighbors, and acquaintances, many of which lasted his lifetime. He made an indelible mark on countless people, never judging and always offering heartfelt advice. Dad was an avid golfer and a member of the Logan Country Club for over 50 years. He golfed every Wednesday afternoon with dear friends for many years and knew the course and the game better than anyone. He also loved the Aggies, skiing, reading, home projects, being outdoors, black-road car rides, watching sports, off-roading with Ann Marie, and keeping a meticulous yard, home, and car. He was incredibly proud of his kids and grandkids and supported them in everything they did. Some of his greatest joys came from their successes. Dad was an active member of The Church of Jesus Christ of Latter-day Saints. He rediscovered the gospel later in life and served in many callings where he committed his every energy. He is survived by his wife Ann Marie and his three children, Hollie (Mike) Plowman of American Fork, UT; Jamee (Brendon) Wright of Kaysville, UT; and Haylee (Nick) Johnson of Smithfield, UT; seven grandchildren; three great grandchildren; and his brother Steven (Linda) of Logan, UT. He was preceded in death by his parents. We miss you already, Dad. Wonderful memories of your unmatched wit, freshly starched shirts, curly dark hair, and infectious smile will live in our hearts until we meet again. A viewing will be held on Wednesday, February 3 from 6:00 – 7:00 p.m. at Allen-Hall Mortuary at 34 East Center Street, Logan. Masks and social distancing are requested. Funeral services for immediate family will be held on Thursday, February 4 at 12:00 p.m. at Allen-Hall Mortuary. The funeral will be broadcast to those who would like to join via a video link found in his obituary at www.allenmortuaries.net. Interment will be at the Providence City Cemetery. We’re sad that extended family members and Dad’s many friends cannot join us in person to celebrate his amazing life, but we encourage you to please share your memories and photos on Facebook at https://www.facebook.com/groups/709389119722257 or email [email protected] To live stream the funeral, click on the following link (password: Slim) https://us02web.zoom.us/j/89462072991?pwd=VTdZUitqZGRibC9RMlArS0tsRkR3QT09

Lynn (Slim) Hicken passed away January 29, 2021, after a valiant fight with cancer. Dad was born February 2, 1943, in Heber City, Utah to Marion Carlile and Dean Hicken. He moved from Heber City to Logan as a young child, and his family eventually... View Obituary & Service Information

Send flowers to the Hicken family.