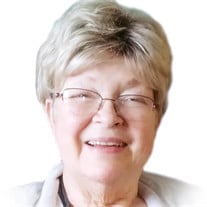 MaRee Naylor Smith 74 of Providence, Utah joined her sister and brother inlaw Betty and Melvin Baliff on Friday, January 29, 2021. She died suddenly after extended illnesses. She was born on April 5, 1946 in Logan, Utah, the daughter of Albert Naylor and Opal Ann Jenson Naylor. MaRee attended school in Providence and graduated from South Cache High School and LDS Seminary. MaRee served a mission for the Church of Jesus Christ of Latter-Day Saints to the Southern States mission. After returning home from her mission, she married Jeremy Roger Smith in the Logan LDS Temple, in March of 1969. Shortly after their marriage they moved to Auburn, New York. After about two years they moved to Providence, Utah, where they still live. MaRee was active in many callings for the LDS church including over four decades of service to the LDS church youth. MaRee loved to sing in the church and community choirs. She worked many years for the church overseeing and caring for many of the church owned buildings in Cache Valley. She lived a very charitable life. Assisting the elderly, disabled, neighbors, family, and youth. She was always in the service of others. She will always be remembered for her compassion as was seen in the way she took care of everyone she was around. She is survived by her husband, Jeremy Roger Smith of Providence, Utah and they have seven children: Kimburly Sa of Las Vegas, Nevada, Shauna MaRee Smith of Tucson, Arizona, Jeremy Roger Smith of Austin, Texas, Kathy Smith Waters of New Bern, North Carolina, Opal Autumn Reese (LouDell) of Tremonton, Utah, Francis Edward Smith (May Ting) of Logan, Utah, and Robyn Eve Smith of Austin, Texas. MaRee and Jeremy have nine grandchildren. MaRee is also survived by a sister Barbara (Fred) Cooper of Harrisville, Utah, two brothers, Albert Ralph Naylor (Mary) of Lynden, Washington, and John Terry Naylor (Wendi) of Providence, Utah. Funeral Services will be on Friday Feb.5, 2021 at 12:00 p.m. at Allen Mortuary of North Logan, 420 East 1800 North. A viewing will be held from 10:30 to 11:30 prior to services. Live broadcast will be available via www.allenmortuaries.net courtesy of Zoom. Internment will be at the Providence Cemetery. To livestream funeral click on the following link (password: Smith) https://us02web.zoom.us/j/85971638801?pwd=T1RIdlhmUVFISzlJZzgrZXV1WVF1QT09

MaRee Naylor Smith 74 of Providence, Utah joined her sister and brother inlaw Betty and Melvin Baliff on Friday, January 29, 2021. She died suddenly after extended illnesses. She was born on April 5, 1946 in Logan, Utah, the daughter of Albert... View Obituary & Service Information

MaRee Naylor Smith 74 of Providence, Utah joined her sister and...