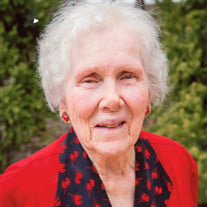 Margene Jensen Willie passed away Saturday, October 31, 2020 at the age of 91. She was born April 6, 1929, to Alvin and Anna Jensen of Young Ward. Her full first name was actually Hedda Margene, as she was named after her Swedish grandmother Hedda Matilda Andersson Clawson, but she was never commonly known by that name--Margene or just Marge was her preference. She grew up in Young Ward and attended schools there and in Wellsville and Hyrum. She graduated from South Cache High School and attended Utah State University (USAC) briefly before getting married. She married Mervyn John Willie from Mendon in 1948 and they spent their entire married life in the same home in Mendon, Utah. She had a good childhood growing up on a farm in Young Ward. She had two brothers, Courtney and Alton and although she always wanted a sister, but never got one, she enjoyed her brothers very much and had wonderful memories of working on the farm with her parents and brothers. Her family raised chickens and cows and grew sugar beets, alfalfa and grain. Every year she helped her Mother grow a vegetable garden and always knelt down after it was planted and prayed over it that it would grow well and provide much needed food for the family. When she was a young girl her parents bought a player piano, because no one in the family played piano. To their surprise, Margene learned to play the piano and music has blessed her entire life. Late in her life, when she couldn't see or walk, she said, "as long as I have music I will be fine." When she and Merv got married they started building a home but while waiting for it to get finished, they rented a home with no indoor plumbing. The winter of '49 was very severe and living in a home with an outhouse proved not very enjoyable. They moved into their new home when their first child was born and have lived in it over 70 years. They lived on a small farm in Mendon and raised chickens, cows and four children: Mary Jean Campbell, (husband Ron) Paul Willie, (wife Kim) David Willie (wife Melanie) and Dean Willie, all of Mendon. Margene was a homemaker until all the children were in school when she worked a few part time jobs and then began working at the Wilson School and Adams School in Logan where she loved the children and others that she worked with for 22 years until she retired in 1990. Margene was content living on a farm, raising a family and a garden and serving in her church. She loved music, flowers and people. She was a faithful member of the Church of Jesus Christ of Latter-day Saints her entire life and served in many church callings. She never lived anywhere but Young Ward and Mendon but prayed every day to thank her Heavenly Father for the wonderful world she lived in. She and Merv rarely traveled very far outside the valley and were always glad to come home to the farm. Her world may have been small but she was always grateful for little pleasures of a good family, kind friends and a warm home. When her children bought her a microwave, she thought it was nice but a little extravagant. When they tried to buy her a dishwasher, she refused, saying she was the only dishwasher she ever needed and she wasn't about to be replaced by a machine. Margene loved good stories, inspirational quotes and a little humor. Some of her favorites were: “Make new friends, keep the old, one is silver, the other is gold.” “There may not be much to see in a small town but what you hear makes up for it.” Margene and Mervyn were married for 58 years when Mervyn passed away in 2006. She has been a widow for the last 14 years. Her son Dean was her faithful care giver for many of her later years. When she turned 90, she was moved into a care center where she died peacefully in her sleep Saturday evening. Shortly before her passing she told the caregivers she was enjoying meeting some new friends and within the hour she passed through the veil. Margene is survived by her four children, Mary Jean, Paul, David and Dean, 10 grandchildren and 24 great-grandchildren and many nieces and nephews. She was preceded in death by her husband Mervyn, parents, brothers and most of her friends. Funeral Services will be held Friday November 6 at noon at the Mendon/Petersboro Chapel. Please wear masks and abide by social distancing. Due to the current Covid-19 pandemic, no viewing or luncheon will be held. A simple card or an email would be more than enough under current circumstances. Arrangements are by Allen-Hall Mortuary and interment will be in the Mendon City Cemetery. Services will be live streamed and may be viewed at www.allenmortuaries.net Services may be viewed at https://us02web.zoom.us/j/88151698870?pwd=L2RaMHgvRkxYQXVrK2NPcTR6Tmh4Zz09 Password: Willie

Margene Jensen Willie passed away Saturday, October 31, 2020 at the age of 91. She was born April 6, 1929, to Alvin and Anna Jensen of Young Ward. Her full first name was actually Hedda Margene, as she was named after her Swedish grandmother... View Obituary & Service Information

Send flowers to the Willie family.