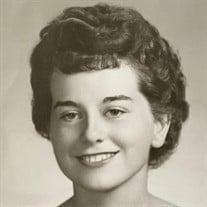 Margo Morgan, Beloved Widow, Mother, Grandmother, and Great Grandmother passed away in the hospital on Saturday, June 13, 2020, due to chronic health issues. Margo leaves behind a sister Sandra Larson of Sutter Creek, CA as well as six children:Todd Morgan of Corona, CA, Cindy Gooch of St. George, UT, Matthew Morgan of Farmington, UT, Janette Morgan of Las Vegas, NV, Brent Morgan of Clemson, SC and Nicole Sanchez of Escondido, CA. Her entire family will miss her dearly including her two sons-in-law and four daughters-in-law as well as her 30 grandchildren and four soon to be 5 great-grandchildren. Margo was born in Syracuse, NY on February 7, 1942, to Horace and Sarah Dann. As a young girl, she suffered many health issues due to anemia so her parents decided to make a cross country move all the way to sunny California when she was only 6 years old. By the time Margo was 8 years old, her mother became ill and Margo was raised mainly by her Father. She always had a heart for doing what is right. After only going to church a few times with her mother Margo had a remarkable conviction to follow the Lord. At the young age of 8, she would walk herself to the Presbyterian church down the street from her house. Margo grew up in Sacramento, CA where at the age of 16 she would meet her high school sweetheart, Charles Morgan. They met on May 9, 1958, on the bus that took their Carmichael High School’s a’cappella choir to Berkley for a competition. They were later married on November 12, 1960, in the Presbyterian Church. Margo later became a convert to The Church of Jesus Christ of Latter-day Saints and her and Charles were married in the Los Angeles Temple on June 5, 1971. She worked as a typist for the Franchise Tax Board of California. She and Charles would eventually move to Cashmere, WA where they would raise their six children. In her retirement years, she resided in Eufaula, OK, Hurricane UT and after the death of her husband in 2019 she would move to Escondido, CA to live with her daughter Nicole and family. Margo was a wonderful Wife, Mother, Grandmother, and friend to many throughout her life. Margo enjoyed gardening, going on walks, sewing, watching church sermons and she had an immense love for butterflies. She was a Godly example and showed a rock-solid faith that would bring her out of many obstacles she would face throughout her lifetime. Her smile would light up any room. She was loved by many and will be dearly missed. A viewing will be held on Wednesday, June 24, 2020, at 10 a.m. with a funeral service following at noon. The services will be held at Allen-Hall Mortuary located at 34 East Center, Logan, UT. A family graveside service will follow the funeral at the Wellsville, Utah Cemetery where our beloved Mother will be laid to rest with her sweetheart Charles. The ceremony will conclude with a butterfly release to honor Margo’s legacy and love for butterflies. Condolences may b

The family of Margo Morgan created this Life Tributes page to make it easy to share your memories.

Send flowers to the Morgan family.