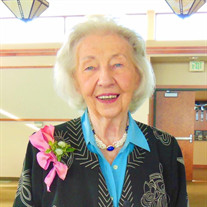 Marian Elaine Hybl Bohm (97) was born September 1, 1924 in Chicago, Illinois and died on April 6, 2022 in Logan, Utah. She was the daughter of Martin John Hybl and Marie Barbara (Mae) Hula. She was preceded in death by her husband, Clarence... View Obituary & Service Information

The family of Marian Elaine Bohm created this Life Tributes page to make it easy to share your memories.

Send flowers to the Bohm family.