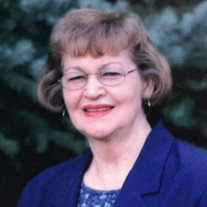 Marian Elaine Olsen McFarland, 90, passed away subsequent to a several year challenge with dementia, in Ogden, Utah on January 9, 2021. Marian was born the seventh of twelve children to Fred Hilary and Ruby Cecilia Rose Denhardt Wilson Olsen on September 5, 1930, in Hyrum, Utah. As a child in a large family in a small home, Marian shared every commodity in the household with siblings, including a single bed with three sisters. During depression years, the Olsens lived on a farm, where food was adequate, if not plentiful, and the family managed to make it through lean times. She recalled occasions when indigenous Shoshones in need would stop by the home, and her mother would often give them bread. She met M. Jack McFarland, and they married on November 3, 1950, just before he left for the Korean War. Their marriage was later solemnized in the Logan Temple. A lifelong active member of the Church of Jesus Christ of Latter-Day Saints, she participated in many functions, most of which revolved around music and children. She served an LDS mission in Albuquerque, New Mexico after Jack’s passing. Marian enjoyed bowling, camping, fast pitch softball, knitting, sewing, and small group semi-formal associations with friends and neighbors. Marian played the piano by ear, and spent lengthy periods of time playing never-composed pieces spontaneously. Many fondly recall her occasional episodes of yodeling bursting through the windows of the home. Family history was important to Marian. She created biographies of herself, Jack, both of her parents, and researched the family many generations into the past. A dogged record keeper, the information she gathered rivals the volume of material held at the Library of Congress. Marian enjoyed close relationships with her family throughout her life. She is survived by four children, Steven (Elena) McFarland, Jill (Scott) Kerr, Julie (Bill) Johnson, and Jeanne (Michael) Fernandez, and many grandchildren and great grandchildren. She also leaves behind her siblings Iris Bee (Joe) Andrews, Sondra (Boyd) Alvis, and Emil Paul Olsen. Marian is preceded in death by her her husband, Merrill Jack McFarland, parents Ruby Cecelia Rose Denhardt Wilson Olsen and Fred Hilary Olsen, brother Wayne Wilson (Melva L.) Olsen, brother Merle Ross Olsen, sister Afton Elizabeth (Carl) Green, brother Gene Vernon (Ruby) Olsen, sister Ruby Eileen (Harold) Schultz, sister Marva Lou (Gerald) Richardson, brother Gaylon Hilary (Gabriella) Olsen, Violet Faye Olsen. She enjoyed an eleven year marriage to the late Ray Garrard , which companionship sustained her in her later years. Due to of covid-19 concerns, no viewing will be held. In lieu of flowers, please donate to the Logan Family History Library, at https://donate.churchofjesuschrist.org/donations/familysearch.html?cde2=473-home& Services are under the direction of Allen-Hall Mortuary. A graveside service will take place at the Providence/River Heights cemetery on Friday, January 15th at 11am. Services will be livestreamed and may be viewed by clicking the following link: https://us02web.zoom.us/j/81366978318?pwd=cTM1MUlnWmdTN3lyanNEc085UWwwdz09 Password: Marian

Send flowers to the McFarland family.