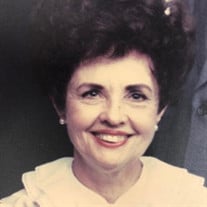 “But the greatest of these is charity.” Marianne Ballam understood and lived that to the fullest. Born on August 23, 1929 in Smithfield, Utah, to Edith Falslev (1908-1979) and Marvin Wayman Fullmer (1905-1942), she peacefully continued her journey home on August 13, 2020. Assuming the role of parent and protector to her four younger siblings at the age of 13 with the death of her father in 1942, she keenly developed the love of caring for others. Her deep-rooted affinity for her Danish heritage sprang from being raised, along with her mother and siblings, in the home of her grandparents Marius Jensen (1875-1957) and Marianne Falslev (1873-1958), for whom she was named. Her grandparents left their beloved homeland after converting to the Church of Jesus Christ of Latter-day Saints to join the saints in Benson, Utah. With their new lives, Marius adopted a new surname after the town of his birth, Falslev, Denmark. More than anyone in their lineage, Marianne kept the Danish traditions and heritage vibrantly alive and spent years bonding her extended families with their cousins remaining in Denmark. Marianne was raised in an environment where vocal music was highly revered. Possessing a voice of clarion beauty, she was offered a vocal scholarship at Utah State Agricultural College in 1947. She was well known as a soloist as well as a sought-after duo with her beloved younger sister, Joyce Fullmer (Pitcher). Their music healed many broken hearts during World War II and the Korean Conflict. She met her “Prince Charming,” Grant Lamb Ballam in 1945 at North Cache High School in Richmond, Utah where she served as student body vice president. A more perfect match was never made in heaven or on earth. Grant proposed marriage to Marianne on her birthday August 23, 1947 while dancing under the mirrored ball at the Dansante Building. They married the following June 18 in the Logan LDS Temple. Together they moved to Pocatello, Idaho where she was employed as an executive assistant and bookkeeper for Garrett Freight Lines and Grant completed his pharmaceutical degree in 1951. Marianne was grateful that Grant turned down a professorship at Idaho State to return home and become head pharmacist at Kennedy’s Drug Store on Main and Center in Logan. In 1952 they built a home at 396 S. 600 E. in River Heights and began cultivating eternally devoted friends. Moving in 1965 to 740 Mountain View Drive, River Heights remained their beloved life-long home. With Grant’s out-going and open nature, and Marianne’s ardent devotion, they worked hard to maintain a multitude of loving friends. Marianne helped Grant open and establish Grant’s Pharmacy in 1959 at 225 E 400 N in Logan. They both loved the associations made through that venture. Grant’s generous nature afforded Marianne and their sons the opportunities to circumvent the globe a number of times and provided her the capability to champion many charitable causes. As a devoted member of the Church of Jesus Christ of Latter-day Saints, Marianne served in many auxiliaries. Her adoration for children enabled her to be the perfect Primary President. She became a second mother to countless nieces, nephews, cousins, and her son’s friends, many of whom lived in their home which was always open to anyone. She enjoyed good health and vitality and loved playing tennis, running, walking and biking around the entirety of Bear Lake. She was chauffer, travel agent and cheerleader for her three sons, Michael Lynn, Richard Grant and Robert Fullmer. She became intimately associated with most of the tennis and basketball courts, football fields, baseball diamonds, theaters and concert halls of the region and beyond. Never missing a game, match or performance of any of her children, grandchildren or great-grandchildren, she accompanied Grant in his fierce loyalty to the USU Aggies as members of the Old Main Society. Her life was one of service and devotion. Being separated from her husband across the veil for over 16 years, the image of her reunion with her beloved Grant, parents, grandparents and countless ancestors for whom she kept a vigilant quest to find and perform saving ordinances, gives us great joy. She was a good and faithful servant and we rejoice in her receiving her eternal reward. She was preceded in death by her husband Grant (1928-2004), parents, siblings Joyce Fullmer Pitcher (1930-1993), Marvin Florin Fullmer (1932-1985) and Dale Fullmer (1935-2020). She is survived by her adored little sister Helen (Deon) Johnson, sons Michael (Laurie), Richard (Beki), Robert (Kimber), 14 grandchildren and their spouses and 28 great-grandchildren. Due to cautionary measures of the Covid pandemic, a private family grave-side service will be held, and later a celebration of her 91st birthday. No formal viewing or funeral will take place. Interment will be in the Ballam plot in the Providence (River Heights) Cemetery. Condolences may be expressed online at www.allenmortuaries.net

The family of Marianne Fullmer Ballam created this Life Tributes page to make it easy to share your memories.

“But the greatest of these is charity.” Marianne Ballam understood...

Send flowers to the Ballam family.