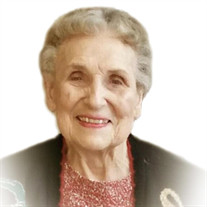 Marie K. Herr (b. Marie Violet Kish), 95, was born February 2, 1926, to Gabor Frank Kish and Lydia Horvath Kish in Delray, Detroit, Michigan. Her Dad drove through a railroad crossing arm in his rush to get the doctor. She grew up in Lincoln Park, MI, and graduated from high school in 1943. She met Gerald Erwin Herr (Jerry) on Easter Sunday of 1945 when he was home on leave from the Navy. They were married September 6, 1947. Their daughter, Kathy, was born in Akron, OH, in 1949, and son, David, was born in Des Moines, IA, in 1952. She died October 6, 2021, in North Logan, UT. Jerry’s job took them around the world. Marie visited 49 of the 50 states, only missing Maine. She lived in Cuba, Portugal, France, India, Canada, Wales, and Venezuela. People told her she should write a book about all those adventures. It never happened. They retired to Northwest Arkansas where they lived for 34 years. Three and a half years ago they moved to North Logan, UT, to Maple Springs, a long-term care facility. Jerry died September 4, 2019, two days before their 72nd wedding anniversary. Marie worked in the family grocery store when she was young. In high school she worked in another grocery store where she was treated like family. Before she was married, she worked for the Coast Guard and an attorney. After Jerry went to work for Firestone, she worked as his secretary (unpaid). She would set up his office in whatever country they were and train the secretaries he hired. She always had her pink portable typewriter with her. Marie had a number of hobbies. She enjoyed knitting, crocheting, and sewing. She made most of Kathy’s clothes growing up and sent her dresses in college. She would make herself an evening dress in the afternoon before hosting a dinner party in the evening. She did decorative painting and china painting. Many in the family still enjoy wearing clothing items she painted on for them. She loved to read, play bridge, and golf (where she was play manager for many years). She did tons of volunteer work. After Jerry retired, they settled in Bentonville, AR. There she ran a Lutheran Braille Center for 25 years at Bella Vista Lutheran Church. Every year she prepared a Thanksgiving dinner for her 75+ volunteers. She did all the cooking herself. She was also the membership chairman of the local AARP chapter for over 20 years. She was the membership chairman for the local Computer Club for seniors. She scheduled all the computer classes they provided free for members. She crocheted and knitted over a thousand baby hats for the local hospital. Marie is predeceased by her husband, Gerald Herr, her parents, Gabor and Lydia Kish, in-laws, John and Martha Herr, sister-in-law, Marilyn Kish, sister-in-law, Beverly LeBarre, brother and sister-in-law, Harley and Eileen Herr, and son-in-law, Robert Bayn. She is survived by her brother Gabor (Slim) Kish, brother-in-law, Dave (Marie) LeBarre, daughter, Kathy Bayn, son, David (Cheri) Herr, grandchildren, Bill (Laura) Bayn, Jenny (Scott) Shine, John Herr, Garrett Herr, and Martin Herr, six great grandchildren, a great-great grandson, as well as numerous nieces and nephews. The family wishes to thank all the caregivers at Maple Springs for the last three and a half years, especially Mark. Also, thanks to Dr. Robert Nash who was so good to both our parents. Marie was a life-long Lutheran. Her funeral will be at Holy Trinity Lutheran Church (581 North 700 East) at 10:00 a.m. on October 30, 2021, followed by Christian burial in the Logan City Cemetery at 11:00 a.m. A luncheon will be served at the church at noon. In lieu of flowers donations can be made to Holy Trinity Lutheran Church or the Alzheimer’s Association. The recorded service will be available via the following link: https://youtu.be/UNiFuXWx6vI It will also be recorded. Visitation will be Friday evening, October 29, from 6-8 p.m. at Allen-Hall Mortuary at 34 East Center St., Logan, UT. To view the program information for the funeral services click on the following link: https://documentcloud.adobe.com/link/review?uri=urn:aaid:scds:US:f9802a95-ad72-48c5-a837-4a2e1fedbcba

Marie K. Herr (b. Marie Violet Kish), 95, was born February 2, 1926, to Gabor Frank Kish and Lydia Horvath Kish in Delray, Detroit, Michigan. Her Dad drove through a railroad crossing arm in his rush to get the doctor. She grew up in Lincoln... View Obituary & Service Information

Send flowers to the Herr family.