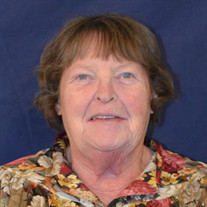 Marilyn Jean Johnson Paulsen passed away on Monday, May 11, 2020 of causes incident to age. Marilyn was born August 20, 1935 in Findlay, Illinois to Carl H. and Ruth Freeman Johnson. She was the oldest of four children; Marilyn Jean, Ruth Eloise, Carl David, and Charles Joseph. Marilyn was raised in Illinois until 1948 when the family moved to Keeline, Wyoming. She finished high school in Wyoming, and then the family moved to Providence, Utah in 1957. Marilyn married Willard Donald Paulsen on August 12, 1964 in the Logan Temple. They lived in Logan for four years, after which they moved to Providence, where Marilyn resided the rest of her life. They were the parents of four children; Jeanette, Michael Willard, Ethel Linda, and Jennifer Lynn. Marilyn was a member of the Church of Jesus Christ of Latter Day Saints, and a member of the Providence 3rd Ward. Her service in the Primary covered nearly 30 years. She felt teaching the children was the most important calling in her church service. Marilyn’s family was the whole emphasis of her life. Even though she had to work outside the home and entrusted the care of her children during the day to her mother Ruth, she was completely involved in their lives. She never missed an activity they were involved in. She went to innumerable band concerts, plays, soccer games, and parades, as well as traveled to Lagoon, the zoo, the Manti Pageant, and camping trips with them year after year. She also enjoyed being a homemaker. Marilyn loved gardening and canning, reading, and sewing. She sewed many of their own clothes. She loved music and played the piano as well as led the music in primary and sang in the ward choir. She and Don had 19 grandchildren and 21 great-grandchildren, which were all a delight to her. Many of those grandchildren lived with her for a short time at some point as they grew up, and after she retired from State Farm Insurance she took care of some of them while their mothers worked at their careers. In her final years, after she was widowed, she invited a granddaughter and her six children to live in the home with her, thus continuing to have young ones surrounding her with their love. Marilyn developed a hobby of scrapbooking in her later years, and created many beautiful books. She made many wonderful books depicting in pictures and narration the life of whomever she was honoring. The best gift to give her was more scrapbooking supplies, a box of photographs, and the request for her to put together another scrapbook about the life of someone in the family. She organized a Paulsen Family History and had copies printed for all family members to learn more about their ancestors and loved ones. Marilyn felt blessed to see all four of her children married in the temple. She was so glad to have them and their children living close by in Cache and Box Elder counties where she could visit with them often. Marilyn loved to host backyard parties for the family in the summer, as well as big Easter, Thanksgiving, and Christmas parties at the church during the colder months. Marilyn was preceded in death by her husband Don, her father and mother, one grandson, and a great-granddaughter. She is survived by her four children, Jeanette (Kent) Baker of Providence, Linda (Lynn) Chadwick of Logan, Mike (Vicky) Paulsen of Tremonton, and Jennifer (Brad) Shelley of Nibley, her three siblings, 18 grandchildren and 20 great-grandchildren. A graveside service will be held on Saturday, May 16, 2020 at 11:00am, with a viewing before the graveside service at the cemetery from 10-10:45 a.m. which may be viewed through the Zoom link on the Allen-Hall Mortuary webpage. Interment will be in the Providence Cemetery in River Heights.

Marilyn Jean Johnson Paulsen passed away on Monday, May 11, 2020 of causes incident to age. Marilyn was born August 20, 1935 in Findlay, Illinois to Carl H. and Ruth Freeman Johnson. She was the oldest of four children; Marilyn Jean, Ruth... View Obituary & Service Information

Send flowers to the Paulsen family.