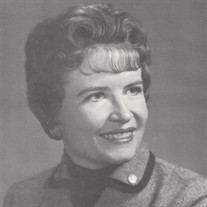 Marilyn C. Pratt, age 89, passed away on Sunday, June 20, 2021 at the Maple Springs of North Logan care center in North Logan, Utah. Marilyn was born to Robert Price and Mildred Eliza Thomas Clayton in Sharon, Bear Lake, Idaho on June 13, 1932. She was the first of three children. As a young girl, Marilyn was a student in many of the one-room school houses in the surrounding small towns around the Bear Lake area, including Liberty, Dingle, Ovid, and Montpelier, where her parents taught and administrated. In addition, even in her early years, Marilyn demonstrated an exceptional ability as a musician which she used throughout her life becoming proficient in playing the piano, organ, and French horn. During her life, she used these talents as a teacher, performer, and accompanist for both community and church. She also loved to read, and wherever she was, there was usually a book nearby. Marilyn graduated from Montpelier High School in Montpelier, Idaho in May 1950. Four years later she graduated with a Bachelor of Arts degree emphasizing Music, Education, and English from Idaho State College in Pocatello, Idaho. Following her years of college, she moved to McGill, Nevada where she taught Elementary music, and eventually met her future husband, Dale William Pratt of Ely, Nevada. She married Dale on January 23, 1955 and a year and a half later, they had their only son, John. Marilyn continued to work for the White Pine County Schools at White Pine High School in Ely, Nevada as an English teacher. Her talent as a teacher was noticeable to her students and administrators who would recall years later the inspirational influence she gave to everyone around her. Once she wrote: Since my first day in First Grade, I have loved being in a school situation. There is nothing better than being in a place where teaching and learning are going on. Marilyn retired from teaching school in 1973, and husband and wife relocated to Salt Lake City, Utah and, eventually, to Hawthorne, Nevada, where Dale died at work in December 1989. Consequently, Marilyn again relocated, this time on her own, to Logan, Utah to be near her son, John, his wife, Marianne, and her grandchildren. Besides spending time with her family after arriving in Logan, she served in various capacities in the Church of Jesus Christ of Latter-Day Saints and taught piano lessons at home. In addition, she accompanied the middle school choir at Mount Logan Middle School for several years. She continued to enjoy her family and friends until illness prevented her from living alone causing her to relocate to the care center at Maple Springs where she recently passed away. Marilyn is survived by her sister; Gaylen Shelley Hatch of Vernal, Utah; son, John (Marianne) of Smithfield, Utah; grandchildren, Suzanne, Dale, John (Sarah), Rebekah, and Thomas; great grandchildren, and nieces and nephews. She was preceded in death by her husband, Dale; her parents; and a sister, Mildred Tess. A graveside service will be conducted for Marilyn in Ely, Nevada on June 25 at 9:00 am in the Ely City Cemetery.

The family of Marilyn C. Pratt created this Life Tributes page to make it easy to share your memories.

Send flowers to the Pratt family.