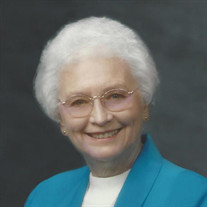 Marjorie Reese Johnson Call was born on March 6, 1931, in Smithfield, Utah, to Athen Lowell Reese and Jessie Smith Reese. To pay the doctor’s home delivery fees, her father sold his new Model A Ford - but as Marjorie was of much greater value, the deal was the best exchange the family ever made. Her parents and older siblings, Grant and LuDene, welcomed their new baby with open arms. “Good natured, almost to a fault,” as her father described her, Marjorie scattered sunshine wherever she went, making friends, loving others, and being loved in return. She very much enjoyed her school years and graduated from North Cache High School in 1949, having served as student body secretary. She continued her education at Utah State University. Music was in Marjorie’s soul, and she played the piano and sang beautifully (particularly in harmony with her alto voice). She was a member of the Singing Mothers and, in later years, the Logan Towne Singers and the Northern Utah Chorale Society, singing in New York City, Rio de Janeiro, and Europe. That love of music was passed down to her children and grandchildren. While growing up, Marjorie developed tender feelings for Lorenzo Gail Johnson, the boy next door, who returned her affections wholeheartedly. After Gail served a two-year mission for The Church of Jesus Christ of Latter-day Saints to Virginia and North Carolina, they married in the Logan Temple on October 11, 1951. Nine months and two days later, they welcomed twin daughters, Sheri Ann and Teri Lyn, to their family, followed thereafter by a daughter, Maureen, and two sons, Jeffrey Lorenzo and Kelly Lowell. Marjorie delighted in being a wife and a mother. While raising their family, she and Gail took every opportunity to enjoy educational experiences and fun adventures together. With Logan as their home base, they lived in many different states, including Michigan, Texas, Oregon, Missouri, and Hawaii, making lifelong friends and good memories wherever they went. Marjorie had a passion for travel, and over the course of her life she was able to travel to every continent but one. As her children married and started families of their own, Marjorie rejoiced in her role as grandmother, loving each grandchild “Like. . .” as she often said, “you can’t believe.” Her ever-expanding family soon grew to 22 grandchildren, all of whom have precious memories with Grandma, including sleepovers, hugs, laughter, and trips to Bear Lake and Lake Powell, where, as she would say, “A good time was had by all.” Marjorie’s hands were always busy serving others. Some of the family’s greatest treasures are afghans crocheted by Marjorie. Each child and grandchild received one of these afghans (a total of 27), and a picture display on a wall in her home of each one holding their individual afghan read, “A Family Stitched Together With Love Seldom Unravels.” Marjorie and Gail were faithful members of The Church of Jesus Christ of Latter-day Saints and served in a variety of callings. Some of their favorites included being Temple Square missionaries from 1993-1994 and serving in the Washington D.C. Temple Mission from 2002-2003. They also kept happily busy as officiators in the Logan Temple for many years. Marjorie had a deep and abiding faith in Jesus Christ and lived as a true disciple. After nearly 58 years of a beautiful marriage, Marjorie’s sweetheart, Gail, passed away from cancer in 2009 - a devastating loss. But Marjorie bore her grief with her customary grace and enjoyed spending time with her family. Love blessed Marjorie’s life a second time as she once again fell for the “boy next door,” and she married her longtime neighbor and friend, Jay Call, on June 18, 2011. Jay brought great happiness and comfort to Marjorie during their nine years of marriage, and her family is thankful to him for all of the love and tender care he gave to her. Marjorie passed away on March 26, 2020, in Hyrum, Utah, at the age of 89 from issues incident to age. She was surrounded by her children and her husband. Marjorie is preceded in death by her parents, Athen Lowell and Jessie Smith Reese; her siblings, LuDene Reese Poulsen and Grant Lowell Reese; and her first husband, Lorenzo Gail Johnson. She is survived by her second husband, Jay Wood Call, and her children: Sheri (David) Davis; Teri (Bill) Mortensen; Maureen (Gene) Higham; Jeffrey (RuthMae) Johnson; and Kelly (Sharon) Johnson. Marjorie also leaves behind 22 grandchildren and 59 great-grandchildren. Because of the current Coronavirus pandemic, a private virtual funeral for Marjorie will be held via Zoom Video Communications on April 3, 2020. Interment will be in the Logan Cemetery. Marjorie’s passing leaves a great void in our family, and we will all miss her terribly. Her faith, optimism, love, and sense of adventure (“Let’s do it!”) will live in our hearts, sustaining us until we see her again. In lieu of flowers, the family requests donations be made to the Humanitarian Department for The Church of Jesus Christ of Latter-day Saints in their efforts to assist those impacted by the COVID-19 pandemic.

Marjorie Reese Johnson Call was born on March 6, 1931, in Smithfield, Utah, to Athen Lowell Reese and Jessie Smith Reese. To pay the doctor&#8217;s home delivery fees, her father sold his new Model A Ford - but as Marjorie was of much greater... View Obituary & Service Information

The family of Marjorie Reese Johnson Call created this Life Tributes page to make it easy to share your memories.