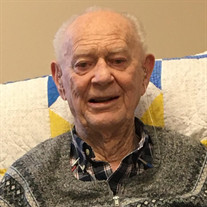 Marloe, age 90, passed away peacefully with his son and daughter nearby. Marloe was born in Wellsville, Utah to William Spence Archibald and Zina (Glenn) Archibald. His roots were planted in Wellsville as he attended Floridale Elementary and South Cache High. He continued his schooling at Utah State University obtaining a master’s degree in Industrial Arts. Marloe Joined the Army September 1948 -June 1950 where he served with a quartermaster unit in Guam. He was later recalled to serve with the 204th Field Artillery BN, KOREA. He was very proud to serve with his fellow soldiers from Cache Valley. He had a deep love for his country and was proud that he was able to serve and fight for our freedoms. After returning home, he met Arlene Halling in Mantua, at the local Country store as he was filling up his Harley Davidson 64. He swept her away to the other side of the mountain and they started their life together in Wellsville. Their marriage was solemnized in the Logan LDS Temple January 25, 1952. Upon completing his degree, Marloe started teaching Industrial Arts at the Intermountain Indian School where he spent 27 years teaching many trades. Marloe and Arlene were blessed with a family of four children, Ann, David, John and Zina Jane. He spent summers building houses, teaching his kids the value of hard work. He would help neighbors and friends whenever they called needing some kind of help, fixing a broken sink, hauling some wood or fixing a car. He had a close relationship with his two brothers who also lived in Wellsville. They often worked together on different projects, helping each other out. His Sister, Denae often visited Wellsville to visit and spend time with her brothers. After his retirement from the Intermountain Indian School, he spent his time doing farming and countless hours of genealogy. He was very anxiously engaged in searching his ancestry lines and discovering their histories. He was a member of the Church of Jesus Christ of Latter-Day Saints and faithfully served in many callings throughout the years. Marloe’s firm testimony of the gospel strengthened his family and those around him. Marloe and Arlene served 18 months in the Florida, St. Petersburg Mission, where they enjoyed sharing the gospel. He made many new friendships with those he served with while working as an officiator at the Logan LDS Temple for over 20 years. Marloe was preceded in death by his parents, a brother, a sister, a daughter (Ann) and Son (John). He is survived by his sister Denae Balls, (Lew Dell), brother Glen (Eve), son David, (Beth), daughter Zina (Norm), 15 grand children, and 18 great-grand children. A family viewing and prayer will be held on Thursday, Sept 17th at 9:30-10:30 at Allen-Hall Mortuary in Logan. A graveside service will follow at 11:00 am at the Wellsville City Cemetery. Those wishing to attend the service, to honor and remember Marloe , are encouraged to wear masks. Services will be livestreamed and may be viewed at https://us02web.zoom.us/j/87611327411

Marloe, age 90, passed away peacefully with his son and daughter nearby. Marloe was born in Wellsville, Utah to William Spence Archibald and Zina (Glenn) Archibald. His roots were planted in Wellsville as he attended Floridale Elementary and... View Obituary & Service Information

Marloe, age 90, passed away peacefully with his son and daughter...

Send flowers to the Archibald family.