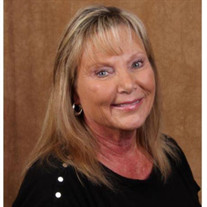 Marsha-Lynne Utahna Brough Nelson passed away suddenly and unexpectedly on August 28, 2021, at her home in Cedar Hills, Utah. She was born on April 19, 1951 in Los Angeles, California, to Robert Marshall Brough and Utahna Clayton Peterson, who were the parents of two daughters and three sons. During her youth Marsha studied music and played the cello and piano. Her love of music continued throughout her life during which she played the piano and organ for numerous church services and community events. In the early 1970’s, Marsha attended Brigham Young University where she earned a B.S. degree in history. While at BYU she met her sweetheart, Bryce Cecil Nelson, and they were married on April 19, 1974 in the LDS Los Angeles Temple. Marsha and Bryce were devoted to each other, and took their four children on many family trips. During her married life and up until the time of death, Marsha worked as a loan officer or manager at different banks. Her integrity, positive personality, and knowledge of business practices was appreciated and admired by her colleagues and patrons. Marsha was a very caring person and expressed her love to others through her service to them—both to her family and extended relatives and those she associated with. Marsha is preceded in death by her parents and her sister, Madeline, and is survived by her husband, Bryce, their four children, David Nelson of Lehi, Utah, Shannon Martin (Jared) of Queen Creek, Arizona, Matthew Nelson (Rebekah) of Pleasant Grove, Utah, and Daniel Nelson of American Fork, Utah, eleven grandchildren, and three brothers: John Brough (Nan) of Preston, Idaho, Clayton Brough (Ethel) of West Jordan, Utah, and Robert Brough (Charlene) of Orem, Utah. Funeral services will be held Saturday, September 4, 2021 at 11:00 a.m. in the Ironwood Chapel located at 10455 Ironwood Dr, Cedar Hills, UT. Family and friends may attend a viewing from 9:00 -10:45 a.m. prior to the services. Interment will be in the Highland City Cemetery.

Marsha-Lynne Utahna Brough Nelson passed away suddenly and unexpectedly on August 28, 2021, at her home in Cedar Hills, Utah. She was born on April 19, 1951 in Los Angeles, California, to Robert Marshall Brough and Utahna Clayton Peterson, who... View Obituary & Service Information

The family of Marsha-Lynne Utahna Brough Nelson created this Life Tributes page to make it easy to share your memories.