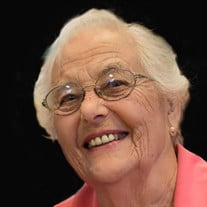 Marvena (Marvie) Holmes Marshall Mallery was born August 23, 1924 in Reedsport, Oregon and passed through the veil July 24, 2020 in Logan, Utah of natural causes. She was just under a month shy of her 96th birthday. Marvie’s early childhood was spent near Walker Oregon, growing up adjacent to the McKenzie River prior to the Great Depression. Instilled at a young age she learned the value of working hard, appreciation for the beauty of nature and a love for others. She recalled one of her favorite activities as a child was spending time and listening to her dad tell stories as he checked and repaired the water flume as part of his employment. Her mom taught her from the scriptures, as well as to crochet; a hobby and skill she taught other women over the course of her life. Following graduation from Springfield High School in Eugene, Oregon her sister LaRene moved to Walla Walla, Washington and Marvie to Boise, Idaho where they were employed as Parachute Packers for the Army Air Corp Pilots and their crew members during WWII. She actually packed the parachute Dad was wearing when he and his crew were shot down over the Black Forest in Germany. It was here that she met 2nd Lt. McCord (Mickey) Marshall a Bombardier Pilot during a dance at Gowen Field. After a brief courtship, they were married at the base chapel. At the wedding ceremony she said, “When Mickey kissed me under the sabers, my hat fell off.” Mac and Marvie then moved to Logan, Utah as residents of the “Island” area. Through Mac’s work they were able to travel and visit several major cities in the United States including New York and New Orleans and for their 50th Anniversary a trip to Rome, Italy. Their marriage was solemnized in the Logan LDS Temple. They were able to celebrate their 60th anniversary prior to his death in 2003. In 2007, she married Phil Mallory. He was a High School friend. He passed away in 2008. Until recently she was fortunate to have been able to stay in her home for a period of 75+ years. Mom was a convert to the Church of Jesus Christ of Latter-Day Saints where she served in a variety of callings including: Mt. Logan Stake Primary President (at that time covered the Island area, along with Providence and River Heights) and twice as Relief Society President; one time being called at the age of 79 in her local ward (congregation). She had a strong testimony of the gospel and Savior Jesus Christ. A close friend mentioned, Marvie said,” You are not called for what you are, but for what you might become.” A unique experience was she taught young women in the Beehive program prior to being baptized. She also served for many years at the Logan Temple as a receptionist, as well as serving into the last years of her life in her ministering assignments. Her talents also extended to her dedication in the Boy Scouts of America program. As a council member, she was instrumental in the creation of “Day Camp” for the 11 yr. old boys at Hull Valley located in the Cub River Canyon near Preston, Idaho as well as Camp Wilderness in Logan Canyon and Hunt at Bear Lake, both summer camps for the BSA. Because of her years of service, she received the Silver Fawn and Silver Beaver Awards which she cherished. Outside of these more formal settings Marvie believed in staying physically active. She bowled in three different leagues for several years and did lap swimming at the Municipool several times a week. Being the mother of five sons she accompanied them and was an active participant enjoying fishing and hunting trips with her immediate as well as extended family members throughout the intermountain region. Camping out on the Salmon River or packing up the “rucksack” for annual deer or elk hunts, she loved being with family. Marvie is survived by four sons McCord J. and Kathleen Marshall (Roosevelt, Utah) Dustin H. and Debbie Marshall (Logan, Utah) Krag D. and Cheryl Marshall (Afton, Wyoming) and David H. and Shauna Marshall (Logan, Utah) a brother Zane Holmes and Sister -in- law Diane (Portland, Oregon) and Sister-In-law Luzon Bryner (Logan, Utah). She has 14 grandchildren, 27 great grandchildren and 17 great-great grandchildren. She was preceded in death by her eternal companion McCord (Mac) and a son Brent K. Also, her parents Henry Holmes and Valta Vena Walker, a sister LaRene Huntley and brother David Holmes. A graveside service will be held at 12:00 noon Friday, July 31, 2020 at the Logan Cemetery for those that would like to attend. Due to COVID-19 and out of respect to those attending the service, please wear a face mask and remember social distancing guidelines. Marvie will always be remembered as a devoted wife, mother, grandmother, sister, aunt and friend. She was dearly loved and will be greatly missed. A special thanks to Julie and Holly of Hospice as well as Kris and Violet who were so kind and cared for her during her time at Rocky Mountain Care. Services will be under the direction of Allen-Hall Mortuary. www.allenmortuaries.com

Marvena (Marvie) Holmes Marshall Mallery was born August 23, 1924 in Reedsport, Oregon and passed through the veil July 24, 2020 in Logan, Utah of natural causes. She was just under a month shy of her 96th birthday. Marvie&#8217;s early... View Obituary & Service Information

The family of Marvena Marshall Mallery created this Life Tributes page to make it easy to share your memories.

Send flowers to the Mallery family.