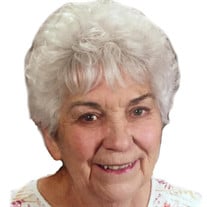 Mary Ann Kohfeld beloved wife, mother and grandmother passed on from this life from liver cancer, at her home in Logan, Utah on 29 April 2021 surrounded by members of her family. Mary was born 16 July 1934 in Smith County, Kansas to Clarence Vernon (Bruce) and Nellie Hazel Wilkerson Amis. The second daughter of cattleman Bruce and farm mom Hazel shaped her pioneer and can-do spirit her entire life. There was not a job, chore or project she would not tackle with quiet will and determination. Mary spent her happy, carefree and safe childhood years on various farms in Kansas playing store with her sister, Norva, “driving” old cars parked on the farm on imaginary road trips or swimming in the stock tank on hot summer days. At age 11 she welcomed her sister, Linda to their family. The Amis family moved to Norton, Kansas for Mary’s junior year in high school where she was a neighbor to Kenny Kohfeld. The time spent living next to Kenny, and prior to the family moving to Smith Center, Kansas left her with the feeling she would marry him, even though she would see him only once in the next six years. After a serious car accident Mary moved home and the conditions were set to be reunited with Kenny as pen pals while he was serving in the Navy. Mary and Kenny were married 4 September 1954 in San Francisco. Mary and Kenny returned to Kansas and became parents to Kathryn and Susan while Kenny attended Kansas State University. In 1956 Kenny contracted polio and the young family became a “poster family” to encourage all to obtain the polio vaccine. This would begin Mary’s years of loving care to her husband and family. During this time Mary and Kenny accepted the invitation of Mary’s mother to investigate The Church of Jesus Christ of Latter-day Saints, a choice that would shape their lives forever. They soon joined the church that began their journey on the covenant path the restored Gospel offers, and the family was later sealed in the Salt Lake Temple in 1961. Two more children, Kurt and Julia were born during this time before Kenny would die unexpectedly on 11 March 1968 while Mary was pregnant with their fifth child Kenneth, who was born several months later. In a desire to be closer to other members of the LDS faith Mary felt inspired to move her five children to Logan, Utah and did so in October 1968 – having been through Cache Valley as she and Kenny had driven to Salt Lake to be sealed in the Salt Lake Temple years before. Mary would spend the next 52 years in the same home in Logan raising five children surrounded by many neighbors and friends that provided loving support and encouragement to the family. Mary maintained closeness with grandparents, aunts, uncles and cousins by taking her children on numerous road trips to Kansas, California and Arkansas. Mary would watch her family grow to 16 grandchildren, 35 great grandchildren and 2 great great grandchildren. Mary’s greatest joy was serving the Lord in and out of her home with her seemingly limitless energy and love. She was a true disciple of Jesus Christ in her service and exhibited many Christ-like attributes. She loved the scriptures, particularly the Book of Mormon-Another Testament of Jesus Christ and personally knew the power of humble prayer in seeking inspiration to life’s challenges. Mary would live with daughter Julie in the home for over 30 years in which time they made family history a true profession with many road trips across the county to courthouses and cemeteries. The use of computers in the work of family history allowed the work of identifying deceased ancestors to progress much quicker as travel became harder for Julie. They would provide hundreds of names and were appreciative of family members and friends who would perform the proxy work in the temple. Mary would embrace her various interests she had over the years like gardening, restoring wood furniture, making her family-favorite homemade ice cream with chocolate sauce, going for long walks, reading, writing letters, BYU football and basketball and enjoying many family game nights. Mary was preceded in death by husband Kenny, her parents, parents-in-law, grandson Ryan Harris, great granddaughter Chloe Coop, brother-in-law Norm Hawley, brother-in-law Chuck Kohfeld passed away 2 days after Mary. She is survived by her children Kathy (Paul) Harris, Sue Doran, Kurt (Connie) Kohfeld, Julie Kohfeld, Kenneth (Kristine) Kohfeld, sisters Norva Hawley, Linda Haney and sister-in-law Bev Kohfeld. A private funeral will be held with no public viewing. In lieu of flowers please consider donations to the LDS Church Humanitarian Aid Fund.

Mary Ann Kohfeld beloved wife, mother and grandmother passed on from this life from liver cancer, at her home in Logan, Utah on 29 April 2021 surrounded by members of her family. Mary was born 16 July 1934 in Smith County, Kansas to Clarence... View Obituary & Service Information

The family of Mary Ann Kohfeld created this Life Tributes page to make it easy to share your memories.

Send flowers to the Kohfeld family.