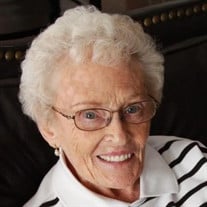 Mary Jane Heninger, formally of Logan Utah, left her body and mortal limitations on February 14, 2021, in Orem Utah. Jane was the embodiment of enthusiastic and abundant love. She always greeted friends and family with a radiant smile and a huge hug, which were manifestations of this love. Jane entered this life September 3, 1934, the fourth of eight children born to Afton and Clifford Christensen. This large loving family provided a framework that would influence the rest of Jane’s life. She started her own family when she married Gale A. Mecham on August 25, 1956. She bore four children, Cynthia, who died at birth, Steven, Patricia, and Neil. In 1962, one month after Neil’s birth, Gale was killed in an airplane accident while serving with the U.S. Air Force REserves. But loss and sorrow never defined Jane. Rather she was known for her faith, gratitude and love. Jane’s family grew again on February 25, 1974 when she married Howard C. Heninger bringing Howard and his children, Kenith and Linda, into Jane’s embracing circle of love. Her family grew to include 32 grandchildren, and 79 great grandchildren at the time of her passing. Howard passed away on October 3, 2004. Jane was an educator. She graduated from Brigham Young University in 1955 and earned a Master’s degree in Child Development from Utah State University in 1966. She was the first kindergarten teacher in Manila, Utah, taught at USU in the department of Family Life where she also served as the director of the child development lab. She later taught kindergarten, first, and second grades at the Adams Elementary School in Logan Utah from 1980 until she retired in 1995. Generations of children have benefited from her interest in, and care for, the youngest among us. But she also taught young women, Relief Society sisters, primary children and men who were smart enough to pay attention. Jane served in many positions in The Church of Jesus Christ of Latter-day Saints. She served as Relief Society President multiple times, in different wards that she resided in, and became a friend and confidant to many who relied on her for counsel and encouragement. She cherished her time as RS President to the Sunshine Terrace Branch were she faithfully served over six years. She had a testimony of the Gospel, its origins and of her Savior Jesus Christ. This brought her great joy and strength throughout her life. Jane leaves on this earth her five children and their spouses, Kenith (Rolayne) Heninger, Linda (David) Danielson, Steven (Karen) Mecham, Patricia (John) Wadsworth, and Neil (Jane) Mecham. She also leaves two sisters, Lura Jean (Louis) Youngberg, Lois (Rex) Lowell; numerous grandchildren and great-grandchildren and countless beloved friends and neighbors. The intensity of her love will be missed, but the knowledge and effects of her love will remain with us forever. Services are under the direction of Allen-Hall Mortuary. A viewing for family members will be held February 27, 2021 at the Canyon View 4th Ward building located at 762 E 1200 N in Orem, Utah at 9 a.m., with funeral services to follow at 10 a.m. Interment will be at the Logan Cemetery. Services will be livestreamed and may be viewed via the following link: https://us02web.zoom.us/j/86536192460?pwd=SFNyQmJVT2MzZ1ZkbWNCRGE1Z0t5Zz09 Password: Jane

Mary Jane Heninger, formally of Logan Utah, left her body and mortal limitations on February 14, 2021, in Orem Utah. Jane was the embodiment of enthusiastic and abundant love. She always greeted friends and family with a radiant smile and a... View Obituary & Service Information

Send flowers to the Heninger family.