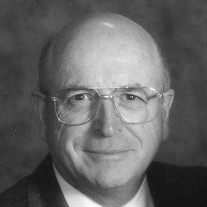 McKinley Beaves Thomas, devoted husband, beloved father and grandfather, and kind and generous friend passed away on Thursday, September 24, 2020 at the age of 87. McKinley was born on February 10, 1933 in Cardston, Alberta, Canada to Grover Alston Thomas and Flora Pearl Beaves Thomas. Mac, as he was known, grew up in the small farming community of Glenwood in southern Alberta. After graduating from high school, he attended Utah State Agricultural College in Logan, Utah where he studied tool engineering. During his freshman year he decided to serve a mission for the Church of Jesus Christ of Latter-day Saints and was called to the Finland Helsinki Mission where he faithfully served for 2½ years. At the completion of his mission, he returned to school at Utah State University from which he graduated in 1959. McKinley met Raija Sisko Töytäri in Finland and they became reacquainted and courted when she attended school at BYU. They were married on February 22, 1958 in the Cardston Alberta Temple. Mac and Raija raised their two daughters while living in Orem, Utah. After 25 years in Orem, they left their friends and neighbors and moved back to Cache Valley in 1987 where they were welcomed by new friends and neighbors. Because of Raija’s failing health, they moved from their North Logan home to Legacy House Assisted Living in 2004. Mac was a gifted engineer. He spent the majority of his career at US Steel Geneva Works in Orem and finished his career at Thiokol Corporation in northern Utah. He was the recipient of four patents for his engineering designs. McKinley served faithfully in the church his entire life, and though he served in many church leadership positions, he was best known for being a gifted gospel instructor at church and at home. He will always be remembered for telling stories of his youth in Glenwood, his sharp and brilliant intellect, and his patient, pleasant, and good-humored nature. He is dearly loved and will be deeply missed. Legacy House of Logan was Mac’s home for nearly 16 years. The kind and generous staff at Legacy House became his second family as they tenderly cared for and served him. While receiving home health nursing services, he was blessed with a wonderful nurse who cared about him, spent time with him, and became his best friend. The family is deeply grateful for all those who have so lovingly cared for him. McKinley is preceded in death by his wife, Raija; his parents, Grover and Pearl Thomas; and his sisters, Joyce Smith and Priscilla Law. He is survived by his two brothers James Thomas and Maurice Thomas; his two daughters Lisa (Kirk) Tanner and Kristina (Steven) Glaittli; his seven grandchildren Logan (Kristen) Tanner, Jessica (Chris) Mitton, Sean (Steph) Tanner, Katherine Glaittli, Scott Glaittli, Jacob (Rachel) Glaittli, and Tyler Glaittli; and nine great-grandchildren Olin, Aanders, Miila, and Eero Tanner; Aili, Estee, and Indy Mitton; Cruz Tanner; and Thea Glaittli. Funeral services will be held on Friday, October 2, 2020 at 12:00 noon at the North Logan Canyon Ridge Ward Chapel, 1650 East 2600 North, North Logan, Utah. A viewing will be held prior to the service from 10:30 to 11:30 AM. Interment will be at North Logan Memorial Park and Cemetery following the service. Allen Mortuary of North Logan www.allenmortuaries.com Services may be viewed at: https://us02web.zoom.us/j/83517817197?pwd=Um1xUURNYnNVK3BUcWVScVI2VHcrZz09 PASSWORD: 916697

McKinley Beaves Thomas, devoted husband, beloved father and grandfather, and kind and generous friend passed away on Thursday, September 24, 2020 at the age of 87. McKinley was born on February 10, 1933 in Cardston, Alberta, Canada to Grover... View Obituary & Service Information

Send flowers to the Thomas family.