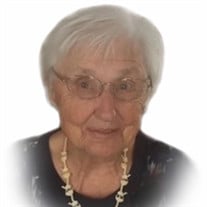 Melva Goering Wiebe died on January 5, 2022, 2 weeks after her 99th birthday. Her mind and spirit were lively to the end, but her body was worn out. Melva was born on Dec. 22, 1922 in a Mennonite community in Kansas, one of seven children raised on a farm. The Mennonites spoke German at home and maintained a strong cultural identity. Even after a lifetime of living away from Kansas and traveling the globe, Melva treasured these roots, her siblings, and all their children. Melva didn’t follow the prescribed prairie life. Although she taught in several one-room schoolhouses in Kansas, she also earned a master’s degree in English literature and traveled independently to Europe. She married Herman Wiebe in 1951, and within a few years they made their home in Logan, Utah, where she has lived the rest of her life. They found community in the First Presbyterian Church of Logan where Pastor Miner Bruner welcomed newcomers from diverse religious backgrounds and organists Thomas Bahler and Coburn Williams provided the music that spoke to their souls. Herman was a professor of botany at USU. Melva embraced the role of partner to Herman’s scientific curiosity, and they shared a love of travel and adventure. Every seven years, Herman took a sabbatical and carried his botanical pursuits to another country, with his family in tow. Sadly, Herman was taken by cancer in 1984. They had two children, Bill and Sara “Sally”. Sally and her husband, Von Krebs, settled in Cache Valley, while Bill moved to Alaska, built a boat, became a commercial fisherman and married Jane Wipf. Melva has 3 grandchildren. Melva has always approached life with vigor, and has pursued many interests, pragmatic, intellectual, and artistic. She gardened extensively with Herman, and even grew her own poppy seeds to make her Mennonite cakes. She was an accomplished watercolor artist. Melva was a formidable opponent in Scrabble, winning small tournaments even in her ‘90’s. Her family fondly recalls her pies with the signature olive branch carved in the top crust. She knitted, played bridge, loved Jeopardy, and was an avid reader and writer. Melva followed politics, and had fierce opinions, which she was happy to share. She loved music, even in her dying breaths. She left a note specifying the type of remembrance she would prefer. It involves mostly music and some specific instructions about what was not to be included. An event is being planned for later this year. The genuine love and care shown by the staff of Maple Springs Assisted Living and Tender Care Hospice inspired the family’s deepest gratitude. Melva will be missed and we are grateful for the love and energy she has given our lives.

Melva Goering Wiebe died on January 5, 2022, 2 weeks after her 99th birthday. Her mind and spirit were lively to the end, but her body was worn out. Melva was born on Dec. 22, 1922 in a Mennonite community in Kansas, one of seven children raised... View Obituary & Service Information

The family of Melva Goering Wiebe created this Life Tributes page to make it easy to share your memories.

Send flowers to the Wiebe family.