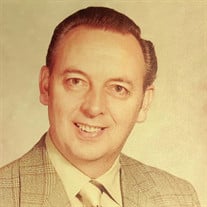 Merlin C. Leonhardt, 97, passed peacefully in his sleep in the early morning of Tuesday, January 18, 2022, at Maple Springs Assisted Living in North Logan, Utah. He was born December 18, 1924, at the family home in Providence, Utah. He was the fifth child of Alma and Melva Shaffer Leonhardt. He was raised in a loving home. His mother passed away when he was nine years old. This was a difficult time for him and his five siblings - Elwood, Fern, Lloyd, Willis, & LaRae – all deceased. His father married Minna Heide a year later and two more siblings were added - Melva (Daren) Reese and Alma (Pam) Leonhardt both from Providence. Merlin worked alongside his father who was custodian of Providence Elementary School and Sexton of the Providence Cemetery. This meant staying every night after school to help clean the school only then to spend evenings and Saturdays working in the cemetery keeping lawns green and helping dig graves. When he wasn’t busy, he was working at various places in Logan, such as Superior Cleaners, Royal Bakery, Boy Scout Office, C.C. Anderson, Bluebird Restaurant, and Rechow Shoe Store. Merlin graduated with a bachelor’s and master’s degrees from Utah State University. He spent 25 years in California teaching and in school administration - at times for more than one school at the same time! When he returned to Logan, he worked for the Utah Department of Corrections as an Adult Probation Officer in Brigham City. He did well in this work and enjoyed it, but decided, even though he was older, to go back into education. He worked for Cache County Schools for 14 years and retired again at age 70, having spent 39 years in public education, 23 of which as a principal. Merlin, not one to be idle then worked on the staff of USU for a year as a supervisor of student teachers. Merlin was the first missionary called from Cache Valley after WWII and served in eastern Canada in Ontario and Quebec. Later, he was drafted into the army and had basic training at Fort Ord, California. Merlin was assigned to Germany where he attended army finance school and worked in the finance division of the First Army. After a long courtship, he married Rita Mouritsen in the Logan Latter- Day Saint Temple on July 18, 1968. They were blessed with two daughters, Sandra (B. Craig) McAllister of Logan and Kristy (Kevin) Fry of Bluffdale, married previously to Brent Thomas of Logan. Each daughter has three daughters and one son. His family was a source of joy and pride to him. Merlin enjoyed playing piano and organ. He liked singing in duets, quartets, and choirs. He sang with the Mormon Choir of Southern California for a number of years. He loved good harmony, not only in music, but also in his family and work. He said he first noticed harmony in primary when he said his primary teacher was singing “different” and it sounded good. His callings in the church are extensive and varied. Merlin was a counselor in the bishopric and then bishop of Logan 21st Ward which was changed to the Northwood Ward during his term as bishop. He and Rita were called as service missionaries at the LDS Employment Center. He then served for ten years at the Logan Temple. Merlin loved and enjoyed his wife Rita, children, grandchildren, and siblings. Having married later, he was a favored uncle and friend to many. He loved The Church of Jesus Christ of Latter-Day Saints and he enjoyed serving wherever called. To the end, Merlin was not a complainer and left things in order. As a devoted husband he and Rita moved to Maple Springs so, with their help, he could assist with Rita. Merlin was so very thankful for all blessings he had been given by his Father in Heaven. He will be remembered as a man of integrity and discipline. He devoted his life to the service of family and community. He had a regal, dignified air about him, but could surprise you with quick wit and playfulness, especially around children. His motto was “A place for everything, and everything in its place.” Funeral services will be Saturday, January 22, 2022, at 1:00 pm at Allen-Hall Mortuary. 34 East Center Street, Logan, Utah. Viewings will be held Friday evening January 21st from 6:30 to 8:30 pm and Saturday from 11:30 am to 12:30 pm. Services will be livestreamed and may be viewed via the following link: https://us02web.zoom.us/j/85907182978?pwd=dCt6bkt1ZHVhY2Q0Q2hWc2JqZWVVUT09 Password: Merlin Condolences may be shared at www.allenmortuaries.net

Merlin C. Leonhardt, 97, passed peacefully in his sleep in the early morning of Tuesday, January 18, 2022, at Maple Springs Assisted Living in North Logan, Utah. He was born December 18, 1924, at the family home in Providence, Utah. He was... View Obituary & Service Information

Merlin C. Leonhardt, 97, passed peacefully in his sleep in the...

Send flowers to the Leonhardt family.