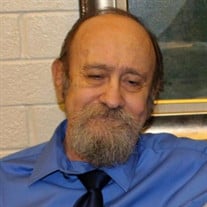 Michael Paul Egan, 68, a long-time resident of Cache Valley passed away unexpectedly on Sunday August 16th, 2020 in Fernley, NV. Michael was born on November 8th, 1951 in Midwest City, OK to Paul C Egan and Marie H Egan. Born into a military family, he had many opportunities to move around not only the country but also the world. Michael met his sweetheart, Kristie Egan of Nibley, UT, they were sealed for all time and eternity on June 6, 1975. Michael was proud of his family’s military service and enlisted in the US Army shortly after graduating high school. During his course of service, he served in Desert Shield, Desert Storm, and then retired after 21 years of service in 2003. During his lifetime, he worked as a mechanic and received his BS from Utah State University. He passed on his mechanical skills to his children and grandchildren. Mike and Kristie had four children; Cory (Sharee) Egan of Whitehall MT, Boyd (Alyson) Egan of Twin Falls ID, Jessica ( Brandon) Winters of Logan UT, and Andrew (Danielle) of Smithfield UT. He loved his 10 grandchildren and 1 newest great-grandson. Michael passed on to his family his love for them, the outdoors, mechanical work, family history, and his country. Some of his fondest memories were bowling with his wife and friends, and during his college years his best grade was billiards. He will be greatly missed by all his family and friends. He is proceeded in death by his parents Paul and Marie Egan of Nibley, sister Pauline, and mother-in-law Luana Anderson. Services will be held on Saturday August 22nd at Allen-Hall Mortuary. A viewing will take place at Allen-Hall Mortuary 34 East Center St from 10:00am to 11:00am with graveside service at Millville Cemetery at 11:30am.

The family of Michael Paul Egan created this Life Tributes page to make it easy to share your memories.

Send flowers to the Egan family.