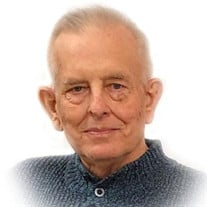 MILLVILLE - Michael Anthon Jenson, 73, passed away on November 26, 2020 from cardiac arrest. He was born January 30, 1947 in Logan, Utah to Anthon Ervin Jenson and Betty Lou Johnson. He lived most of his life in Millville and attended schools in Millville, Providence, South Cache High, and was the first graduating class from Sky View High School in May 1965. In his youth he enjoyed riding horses, hunting, fishing, and spending time with his parents and sister as well as his many cousins and friends in Millville. He learned to work from an early age, milking cows and working on the family farm. Michael enlisted in the US Army in January 1966. He completed basic training at Fort Bliss, Texas and went on to complete infantry training at Fort Ord, California and military police school at Fort Gordon, Georgia. He was then assigned to the 56th Military Police Company at Fort Richardson, Alaska where he served for the remainder of his three year tour until his discharge in 1969. After his discharge he attended USU and worked part-time at the Physical Plant Plumbing Department where he met his eternal companion, Dorene Hampton. They were married on September 17, 1971 in Franklin, Idaho. They were later sealed in the Logan Utah Temple. Michael worked as a drywaller for many years until he began working at Thiokol in Promontory, Utah where he retired in 2009. Michael and Dorene were blessed by the birth of their son Travis Michael on July 24, 1975. Family was very important to Michael. He spent his days with his wife, son and daughter-in-law, and grandchildren. Michael enjoyed learning about his ancestors through family history work. He was an avid sports fan and enjoyed playing many sports in his youth and watching his favorite teams, The Denver Broncos, The Utah Jazz, and the Utah State Aggies as an adult. He is survived by his wife of 49 years Dorene; his son Travis (Stacie) of Millville; three grandchildren, Cole (Cassie) of Clifton, Idaho, Kirby and Chance of Millville; one sister Marjorie (Wayne) Davis of Millville; and one brother-in-law Alan (Fae) Hampton of Fairview, Idaho. He was preceded in death by his parents Anthon and Betty Lou Jenson and his mother and father-in-law Alma and Maxine Hampton. The family would like to thank Dr. Michael Stones and staff and all those who helped care for Michael these last couple of years. They would also like to thank the paramedics and first responders who attended to Michael. Due to circumstances created by COVID-19, a viewing for family and friends will be held on Wednesday December 2, 2020 from 11:30-12:30 at the Millville First Ward church building. This will be followed by a family and friend graveside service at 1:00 at the Millville Cemetery.

MILLVILLE - Michael Anthon Jenson, 73, passed away on November 26, 2020 from cardiac arrest. He was born January 30, 1947 in Logan, Utah to Anthon Ervin Jenson and Betty Lou Johnson. He lived most of his life in Millville and attended schools... View Obituary & Service Information

The family of Michael Anthon Jenson created this Life Tributes page to make it easy to share your memories.

Send flowers to the Jenson family.