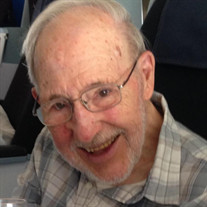 On October 6, 2020, Nils-Åke Ferdinand Jacobson, 92, loving father and grandfather, passed away peacefully at his residence at Cache Valley Assisted Living in Providence, Utah with his daughters at his side. Nils-Åke was predeceased by his beloved wife, Lupita Orozco Jacobson, in 2006. Nils-Åke was born in Skänninge, Sweden on December 11,1927, the son of Nils-Georg Jacobson and Rosa Aurora Henell and enjoyed an idyllic childhood growing up in the paper mill town of Skärblacka, Sweden where he swam and played bandy on the river, and skied to school in the winter. He moved to Norrköping while attending the Institute of Technology where he obtained his B.Eng. in chemical engineering. After serving two years in the Swedish Army, he returned to Skärblacka where he worked at the pulp and paper mill. Based on the recommendation of visiting paper mill owners he moved to the United states in 1954 to work for the West Virginia Paper Company in Charleston, South Carolina for international work experience. After a couple years, he wanted to see a bit more of the country and transferred to their paper mill in Mechanicville, New York. There, he was joined by many other engineers from several European countries with whom he became lifelong friends. He also met a visiting scientist from Mexico, Lupita Orozco de la Hoz, whom he married in Sept 1959 in a beautiful ceremony in Mexico City. Together, they decided to remain in the US. In 1964 Nils-Åke became a US citizen and graduated from Rensselaer Polytechnic Institute with a MS in project management. A few years later he moved his young family to Lombard, Illinois to start a new job in the emerging field of environmental engineering where he specialized in fluidized bed technology. He continued to work along the same lines when he moved to Cupertino, California in 1977. The best part of that move was living near his Uncle Axel Henell (Florence), cousins Robert Henell (Jan) and Karen Ruland (Chet) and their families. He considered Cupertino his home for the rest of his life, despite a few short moves within that time. His career was marked by travel, which he really enjoyed, spending extended periods of time in New Jersey, South Africa, Japan, Germany, Egypt, and even returning to Sweden (Finspång) to work for a year. He loved sharing his experiences with his family, and invited them to join him when possible. Nils-Åke was a good-natured man with a positive outlook who enjoyed meeting people and together with his wife made good friends wherever they lived. He was a proud member of the Swedish Club of San Francisco and served on the board of directors several years. Nils-Åke will be remembered by his friends and family for his intelligence, quick wit and ability to tell a good joke, his love of classical music, historical fiction, Russian culture and history, a good martini with a cocktail onion, ice-hockey (SJ Sharks), and especially chocolate. Most of all he loved his family. Nils-Åke is survived and will be deeply missed by his three daughters Astrid Jacobson of Logan, UT, Sonia (Stephen) Orr of Campbell, CA, and Karin (Donald) Miller of Clifton Park, NY; his nine grandchildren Ryanne, Derek, Brandon, Jordynn, Craig, and Jacob Miller, and Annika, Nicholas and Sophia Orr; his sister Ulla Sparrendahl of Vendelsö, Sweden and many cousins, nieces and nephews in Sweden, Mexico and the US. His life will be celebrated at a later time when friends and family can gather together.

On October 6, 2020, Nils-Åke Ferdinand Jacobson, 92, loving father and grandfather, passed away peacefully at his residence at Cache Valley Assisted Living in Providence, Utah with his daughters at his side. Nils-Åke was predeceased by his beloved... View Obituary & Service Information

The family of Nils-Åke Jacobson created this Life Tributes page to make it easy to share your memories.

Send flowers to the Jacobson family.