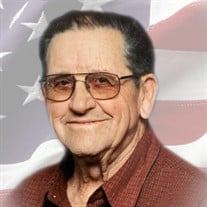 Norval H. Johnson, 94, left this earth to be with his Heavenly Father on February 13, 2021, surrounded by his loving family. He was born May 18, 1926 to William Derby Johnson and Ida Hatch Johnson in Benson, Utah. He was the fourth of six children. He attended school at Benson Elementary, Smithfield Jr. High, and North Cache High School. After graduating high school, he served a tour of duty in the military during Word War II, in Europe. He married Faye Obray Lauritzen, his bride of 69 years, on August 23, 1948. They had four children, and made their home on a dairy farm in Benson. Faye passed away December 3, 2017. Norval was an active member of The Church of Jesus Christ of Latter-day Saints. He served in many positions in the church and enjoyed doing temple work, where he was frequent in attendance. Throughout his life, he enjoyed fishing the Bear River by his home, and was an avid gardener. At age 65, he retired from the dairy farm but continued in his love of fishing, gardening, and caring for their yard. He and Faye also enjoyed traveling, meeting many friends on their various journeys around the world. On October 30, 2014, Norval was privileged to go on the Honor Flight to Washington D.C., accompanied by son Kent and 55 other Vets and their guardians. The Honor Flight flew into Baltimore where they participants then traveled to the WWII Memorial, Korean War Memorial, Lincoln Memorial, FDR Memorial, and Air Force Memorial. They then went to Arlington Cemetery where, at the Tomb of the Unknown Soldier, they watched changing of the guard and proceeded to the Iwo Jima Memorial. When they got back to SLC they were met by family and friends. On the trip, they met friends old and new and had a great time. Norval never forgot his experience, and talked about it often. Norval is survived by his children: Sharon Gould (Joe), Kent Johnson (Julie), Geralynn Galloway (Nick), Tracy Bird (Merrill), 14 grandchildren, 27 great-grandchildren, and 3 great-great-grandchildren. He is survived by sisters: Dessa Beck (lyle), Printha Sorenson (Doug), and niece, Fran Viehweg (Marlow), who was raised at a sister. Norval is also survived by many nieces and nephews, whom he loved very much. Preceding him in death where his parents; wife, Faye; 2 brothers: Byron Johnson, Lee Johnson; a sister, Itha Johnson Stentzel; and 1 great-grandchild. Funeral services will take place Thursday, February 18, 2021 beginning at 12pm at Allen-Hall Mortuary, 34 East Center in Logan. Interment will take place in the Paradise City Cemetery. We would like to thank all the staff at Intermountain Hospice for their loving care. Services will be livestreamed and may be viewed via the following link: https://us02web.zoom.us/j/88561853886?pwd=eHRiNkpCQW5JYklCY0c0cktLTzJEQT09 Password: Johnson

Norval H. Johnson, 94, left this earth to be with his Heavenly Father on February 13, 2021, surrounded by his loving family. He was born May 18, 1926 to William Derby Johnson and Ida Hatch Johnson in Benson, Utah. He was the fourth of six children. He... View Obituary & Service Information

Norval H. Johnson, 94, left this earth to be with his Heavenly...